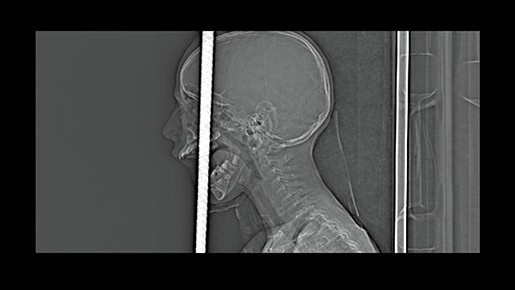 Seven Turkish doctors were able to successfully remove a piece of rebar that pierced through the mouth and impaled the skull of a 7-year-old boy who fell from his bike, after a five-hour surgery Tuesday night in the Black Sea city of Zonguldak.

Fırat Başaran was riding his bike in front of his house in Yeşil neighborhood Tuesday afternoon when he fell 5 meters onto an iron rod that entered his mouth, pierced his brain and broke through his skull.

Fire and medical teams cut the rebar to 1 meter in length and rushed Başaran to Zonguldak Atatürk State Hospital for emergency care. He was then brought to Bülent Ecevit University (BEU) Health Practice and Research Hospital for expert treatment.

He was immediately taken into surgery carried out by seven doctors from the departments of brain and neurosurgery, otorhinolaryngology, reconstructive and aesthetic surgery, and anesthesiology.

Staff from the Disaster and Emergency Management Presidency (AFAD) also assisted in the surgery, cutting the rebar down to 3 centimeters.

After five hours, the medical team successfully removed the iron rod from Başaran's head. The 7-year-old remains in a life-threatening condition in the intensive care unit (ICU).

BEU Health Practice and Research Hospital Chief Physician Dr. Bekir Hakan Bakkal explained the operation: "First the airway was opened by the otolaryngologist and then the AFAD team cut a certain part of the rebar. After that, I started the necessary procedures to create an environment where the rebar could be removed easily and it was removed."

"The patient is now being monitored in the ICU," Bakkal added, thanking AFAD in particular for their significant assistance in the operation.

Assoc. Professor Dr. Şanser Gül of the Ear, Nose and Throat Department said, "(The patient's) consciousness seems clear, but in time we will have a chance to observe what has been lost."

"There is a risk of infection right now, we are struggling with that," he added. "Dozens of people are working on it. Time will tell what will happen."