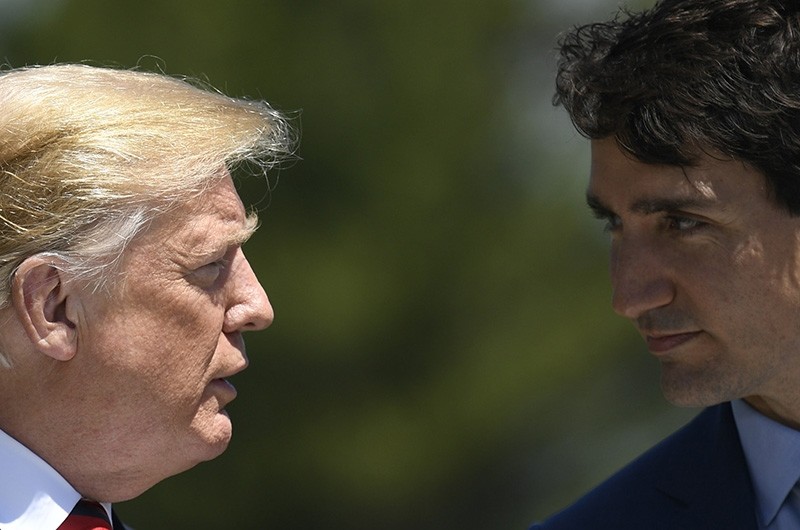 U.S. President Donald Trump and Canadian Prime Minister Justin Trudeau both said on Wednesday that American and Canadian officials negotiating a revamped North American Free Trade Agreement (NAFTA) were probably set to meet a Friday deadline for an accord.

"They (Canada) want to be part of the deal, and we gave until Friday and I think we're probably on track. We'll see what happens," Trump told reporters before a meeting on opioids at the White House.

Trudeau said, "There is a possibility of getting to a good deal for Canada by Friday."

As the crucial phase of talks continued in Washington to try to bridge their differences, the notes of optimism raised the chances NAFTA would continue as a three-nation pact, despite Trump's threat on Monday to leave Canada on the sidelines.

But any agreement "will hinge on whether or not there is ultimately a good deal for Canada," Trudeau said at a student rally in northern Ontario.

"I have said from the very beginning no NAFTA deal is better than a bad NAFTA deal," he added.

After Mexico paved the way by agreeing to a NAFTA 2.0 with the United States on Monday, Canada's Foreign Minister Chrystia Freeland said Tuesday "a lot has been accomplished" in her two meetings with U.S. Trade Representative Robert Lighthizer.

The United States and Canada are now engaged in "an extremely intense period in the negotiations," she told reporters, and trade officials had worked late into the night outstanding issues.

Freeland declined to get into specifics on what issues remained, saying she and Lighthizer agreed not to discuss the details in public.

Lighthizer said he will officially notify the U.S. Congress on Friday of the intention to enter into a new trade pact in 90 days. The White House then would have until Sept. 30 to present Congress with the final NAFTA agreement.

The sticking points between Ottawa and Washington likely will center on Canada's managed dairy market and how to handle some disputes among NAFTA partners.

Ottawa could offer U.S. dairy farmers a small increased share of the market as it did with the EU in a free trade pact last year.

Negotiators have worked for a year to update and rewrite the 25-year-old free trade pact. But in the last five weeks, Washington and Mexico City held talks to resolve their bilateral issues, especially on the auto industry rules, without Ottawa.

While critics said Canada had been frozen out, Freeland has repeatedly stressed to reporters that she remained in close touch with her U.S. and Mexican counterparts throughout the summer and had already achieved "a high-level agreement with the U.S." on some the pending issues on autos and labor rights.

She also met late Tuesday night with her Mexican counterparts, who had remained in Washington after announcing the breakthrough with the United States.

She praised Mexico's willingness to make difficult concessions on auto trade and labor issues, which helped pave the way for a three-party agreement.

"Our workers have been concerned for a long time...about the way in which trade agreements can harm blue-collar workers in high-wage countries," she said.

"There are some important things that we believe that we have accomplished together with the United States and with some significant compromises that Mexico was prepared to make to support Canadian workers."

That "set the stage for very intensive conversations and negotiations that we're going to have."

The outlines of the new NAFTA include a higher percentage of locally-produced components in autos, a percentage of vehicles that must come from high wage factories, tougher worker protections and a provision to review the 16-year deal every six years.

Still, Trump said he would take a tough line with Canada on dairy trade -- long a source of tension between the neighboring countries.

Trudeau has nevertheless vowed not to give in to Washington's demands to alter the system under which Ottawa sets dairy production quotas and prices, with steep tariffs on imports.

The system has been in place since the 1970s and has survived several attempts to undo it.

Trudeau faces political pressure with elections due in a year, which could make him wary of being seen as capitulating to Trump, especially on dairy.

But Ottawa could offer U.S. dairy farmers a small increase in market share as it did with the EU in a free trade pact last year.

Canada also objects to the U.S. call to eliminate bi-national panels to resolve trade disputes among NAFTA partners under Chapter 19, which appears to have been dropped in the deal with Mexico. Canada has used the provision to challenge U.S. anti-dumping and countervailing duties.

But Washington backed away from a strenuously-opposed provision to require the three nations to renegotiate the trade pact after five years. Instead, the agreement with Mexico extends NAFTA for 16 years but with a review every six years.

The White House is pushing to finalize things quickly so that outgoing Mexican President Enrique Pena Nieto can sign the treaty before handing the reins over to President-elect Andres Manuel Lopez Obrador on Dec. 1.