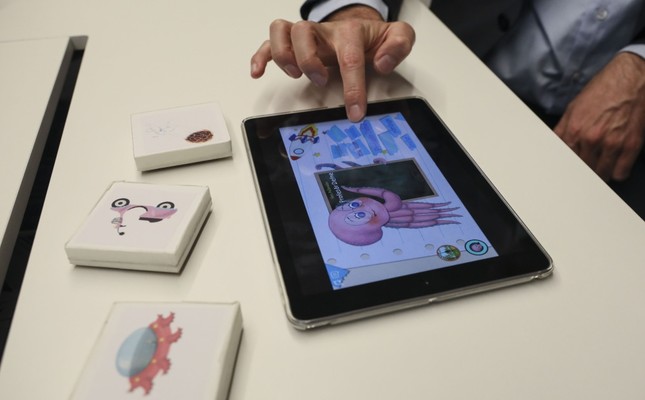 Teknokent at the Middle East Technical University in Ankara has developed new mobile apps that can interact with traditional children's toys.

The apps were developed with the support of the Turkish Scientific and Technological Research Council (TÜBİTAK). These new generation mobile games look to help children's mental development.

With the advancement of technology, the average age of tablet and smartphone users has dropped rapidly. Children now spend more and more time with smart devices than with actual toys. As children no longer play as they should, sitting motionless for hours on end, their mental development often takes the backseat.

"It is scientifically proven that playing with toys and making physical contact with them have a positive effect on children's cognitive development," said Özgür Esen, the general manager of the company that produces the new generation toys.

"We want to create toys that take advantage of advanced technology and contribute to children's mental development," Esen said.

In the first phase of the project, software developers have come up with a game called "Abidin'in Oyuncaklı Hikayeleri" ("Abidin's Toy Stories"). It is available on Google Play and Apple Store. The company plans to launch five more games that can interact with physical toys.

Esen added that the parents will also be able to monitor their children's cognitive development. "The content of the games will be determined according to the children's age group. Our games are mainly for children between the ages of 4 and 12."

Currently, the games are offered in the Turkish language but the company will soon release a patch that will enable games to be used by English speaking children. It will also help Turkish children learn basic English.

Share on Facebook Share on Twitter
Previous in Health It is the age of Generation Z - people born in the mid-1990s to mid-2000s.... Next in Health The global campaign to end AIDS has made significant strides but the...
DAILY SABAH RECOMMENDS