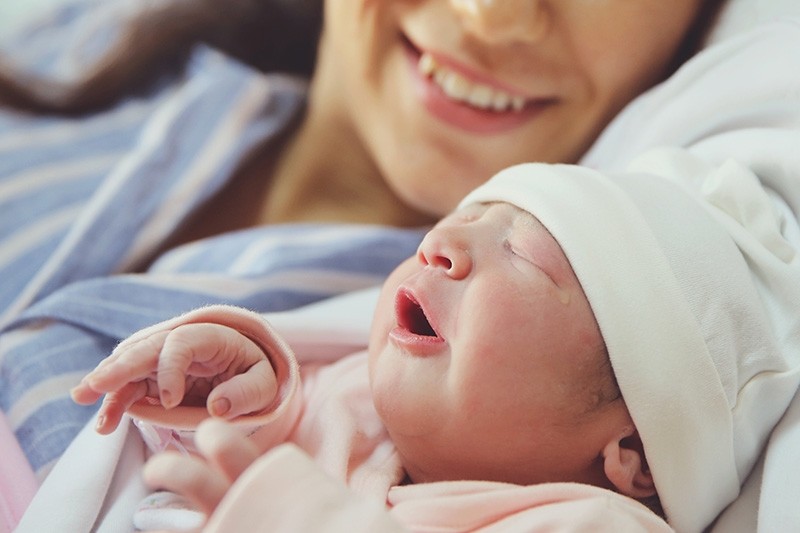 Having a baby temporarily increases the risk of breast cancer by about 80 percent compared to the risk in women who have never given birth, researchers behind a new study have concluded.

But the 80 percent-higher breast cancer risk is not as scary as it first sounds because "fortunately, breast cancer is uncommon in young women," chief author Dr. Hazel Nichols told Reuters Health in a telephone interview.

Nichols and colleagues found that the breast cancer risk peaks 4.6 years after a woman's most recent birth but then begins to fall. After another 19 years, the risk returns to the same level as a woman who has never given birth. And from there, it continues to drop.

By 34.5 years after birth of the youngest child, the breast cancer risk is 23 percent lower than the risk in women who had never been pregnant.

While a 45-year-old woman who had never given birth had a 0.62 percent chance of being diagnosed with breast cancer up to that point in her life, the breast cancer odds for a woman of the same age who had given birth in the past three to seven years were only slightly higher, at 0.66 percent.

Similarly, by age 50, the odds of being diagnosed with breast cancer were 1.95 percent for the childless women and 2.20 percent for women with a recent pregnancy, a difference of only one quarter of a percentage point.

Women who had given birth to their first child before age 25 did not have any elevated risk at all.

"This should not dictate when women decide to have their children because while we are seeing this extra risk after childbirth, this is a period of time when risk overall is exceptionally low," said Nichols. "This is not translating to a large number of additional breast cancers."

Mia Gaudet, scientific director for epidemiology research at the American Cancer Society, agreed. The findings "shouldn't change women's behavior with regard to when a woman decides to have a first child," Gaudet told Reuters Health in a telephone interview.

"It may perhaps change how and when a woman begins to be screened for breast cancer," added Gaudet, who was not involved in the study.

The conventional wisdom has been that pregnancy and childbirth protect women from breast cancer, but that belief had come from looking at the cancer rates among women age 60 and older. In fact, half of women with breast cancer are diagnosed before age 62.

The new findings, reported in the Annals of Internal Medicine, come from combining data from 15 studies of nearly 890,000 women of varying ages across three continents. They confirm what smaller studies have suggested.

With the aggregated data, "we got a rich picture not only of when women have their children but whether they had a family history of breast cancer, whether they breastfed their children, and the type of cancer that developed," said Nichols. "We are not the first to see the short-term increase in risk after childbirth, but we are now able to see whether or not other factors like breastfeeding your children make a difference. When it came to breastfeeding, it did not."

But Gaudet of the Cancer Society said the breastfeeding conclusion is questionable because the Nichols study only looked at whether breastfeeding ever occurred.

That's important because "prior studies have shown that it's the duration of breastfeeding, not whether they ever breastfed or not" that's key, she said. Those studies show that breastfeeding lowers the breast cancer risk.

The Nichols team also found that women with the most children and those who had children later in life had highest risks.

Having a family history of breast cancer doubled the odds of a breast tumor compared to other mothers.

The higher risk for mothers is probably due to the fact the breast tissue divides rapidly during pregnancy, increasing the likelihood that a copying error will be made in the genetic code, said Nichols of UNC's Lineberger Comprehensive Cancer Center in Chapel Hill, North Carolina.