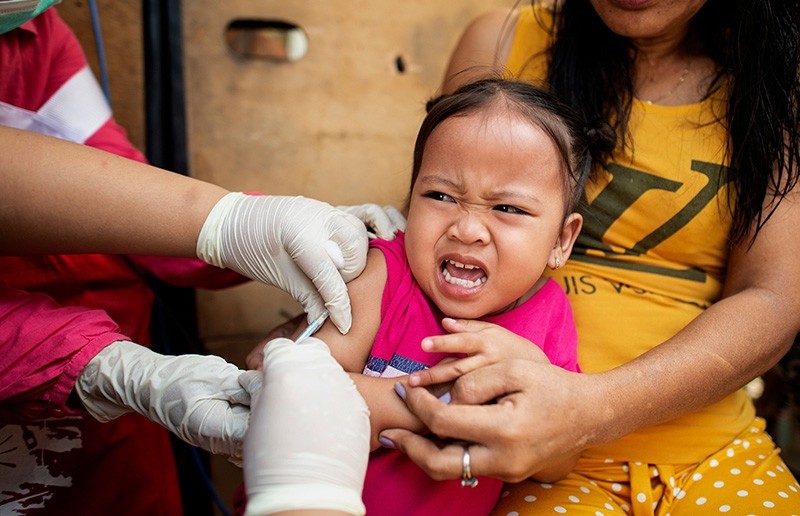 A child reacts during a Philippine Read Cross Measles Outbreak Vaccination Response in Baseco compound, a slum area in Manila on Feb. 16, 2019. (AFP Photo)
by Compiled from Wire Services Feb 18, 2019 12:00 am

The Philippine health secretary said Monday that 136 people, mostly children, have died of measles and 8,400 others have fallen ill in an outbreak blamed partly on vaccination fears.

"No ifs, no buts, no conditions, you just have to bring your children and trust that the vaccines ... will save your children," Duque said by telephone. "That's the absolute answer to this outbreak."

About half of the 136 who died were children aged 1 to 4 and many of those who perished were not inoculated, the officials said.

Duque said a government information drive was helping restore public trust in the government's immunization program, which was marred in 2017 by controversy over an anti-dengue vaccine made by French drugmaker Sanofi Pasteur which some officials linked to the deaths of at least three children.

The Philippine government halted the anti-dengue immunization drive after Sanofi said a study showed the vaccine may increase the risks of severe dengue infections. More than 830,000 children were injected with the Dengvaxia vaccine under the campaign, which was launched in 2016 under then-President Benigno Aquino III. The campaign continued under Duterte until it was stopped in 2017.

Sanofi officials told Philippine congressional hearings that the Dengvaxia vaccine was safe and effective and would reduce dengue infections if the vaccination drive continued.

"It seems the faith has come back," Duque said of public trust on the government's immunization drive, citing the inoculation of about 130,000 of 450,000 people targeted for anti-measles vaccinations in metropolitan Manila in just a week.

Measles is a highly contagious respiratory disease caused by a virus which can be spread through sneezing, coughing and close personal contact.

Complications include diarrhea, ear infections, pneumonia and encephalitis, or the swelling of the brain, which may lead to death, according to the Department of Health.

On Friday, the World Health Organization (WHO) said at least 922 people have died in a measles outbreak in Madagascar since September, the majority of them children. More than 66,000 people in the southeastern African island nation have been infected with the highly contagious virus, the WHO said.

In the Democratic Republic of Congo, at least 137 children have died of measles since the beginning of the year, the U.N.'s MONUSCO peacekeeping mission said last year.

In Ukraine, eight people have died of measles since the start of the year, already half as many as died in the whole of 2018, the health ministry said last week.

The WHO's data show that Ukraine logged 53,000 confirmed measles cases last year, accounting for more than half of all cases in Europe. Skyrocketing measles rates in the country are believed to be due to vaccine refusal as well as a temporary breakdown in vaccine orders by the government a few years ago.

There were 229,000 reported measles cases worldwide in 2018 - double the number of the previous year, according to preliminary WHO figures. WHO experts say the actual number of cases is likely to be many times higher.