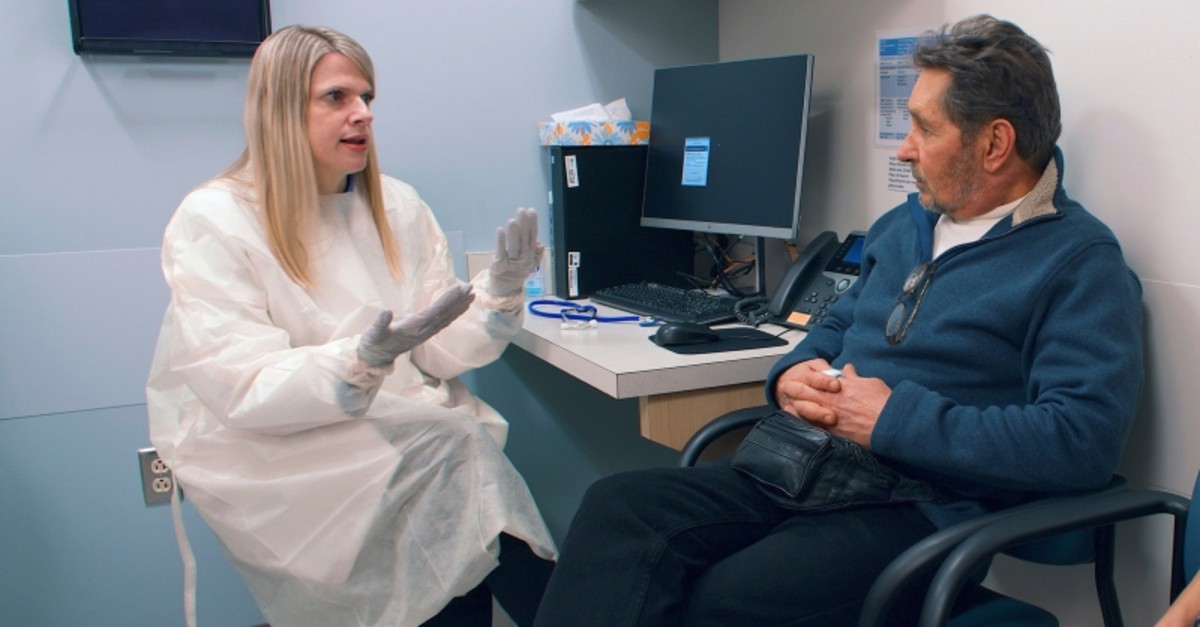 In this February 2019 photo provided by Brigham and Women's Hospital, Dr. Ann Woolley, an infectious disease specialist, speaks with patient Mark Natichinoi at the hospital in Boston. (AP Photo)
by Associated Press Apr 04, 2019 12:22 am

Doctors can safely transplant hepatitis C-infected lungs and hearts into people desperate for a new organ, say researchers who may have found a way to protect those patients from getting the risky virus.

The experiment, reported Wednesday, is the latest attempt to put a dent in the United States' long transplant waiting list by using organs that otherwise would be wasted, often ones from victims of the opioid epidemic.

The new twist: Instead of trying to cure hepatitis C after it took hold in transplant recipients, researchers at Boston's Brigham and Women's Hospital say a faster, cheaper treatment seems to prevent infection in the first place.

"This is about not discarding organs that are medically suitable," said Dr. Ann Woolley, a Brigham infectious disease specialist who co-authored the study in the New England Journal of Medicine.

Transplanting organs that could infect someone with a liver-damaging virus sounds drastic, but the organ shortage has more hospitals giving it a try. More than 113,000 people are on the national waiting list for a transplant; just 36,529 people got one last year. For heart or lung transplants, about 1,000 people a year die waiting.

"I knew that time was getting shorter for me," said Rexford Kelley, 71, of Searsport, Maine. So he sought out the Brigham study in hopes that accepting a lung infected with hepatitis C would mean a speedier transplant. "I'm thankful I got the lung," said the retired state trooper, who now breathes easy enough to get back on the golf course.

Until recently, doctors tended to transplant hepatitis C-infected organs only into patients who already had that virus.

But in 2016, spurred by powerful new drugs that promised to cure hepatitis C, surgeons began experimenting with so-called mismatched transplants — giving infected kidneys to hepatitis-free recipients. If those patients showed signs of infection, they got three months of medicine to beat it back. Last year, small studies at the University of Pennsylvania and Johns Hopkins University showed not only were patients cured of their hepatitis, the new kidney worked fine.

It was time to test more scarce transplants of lungs or hearts. Among the questions: Would hepatitis C make it harder to transplant those more fragile organs? And because the hepatitis medicine costs tens of thousands of dollars, could patients fare as well with a shorter — and cheaper — course of treatment?

In February, Penn researchers reported the standard three-month treatment cured 10 recipients of a hepatitis C-infected heart. One eventually died of organ rejection but the others were faring well.

Brigham researchers took a different approach. Within hours of either a heart or lung transplant, participants started taking medicine for a month in hopes of blocking hepatitis C infection rather than having to treat it.

Woolley said researchers might test even shorter treatment, noting the virus was undetectable at two weeks.

It might work "because maybe the virus hasn't had the chance to establish itself," said Dr. Peter Reese, a Penn kidney specialist who helped pioneer hepatitis C mismatch transplants but wasn't involved in the latest research. But, "if the short course doesn't work, it's incumbent to be up front with patients about what they would do."

Larger and longer studies are key for all hepatitis C-infected transplants, Reese added.

Many hospitals aren't waiting for more evidence. Last year, there were 1,274 hepatitis C-infected transplants in people without the virus compared to several hundred the year before, according to the United Network for Organ Sharing, which oversees the nation's transplant system.

"It's not established that cure rates are 100 percent," cautioned UNOS chief medical officer Dr. David Klassen. "To believe they would be, would be a little naive."

But one Penn heart recipient said patients should know this option could cut their waiting time. Tom Giangiulio Jr., 59, of Waterford Township, New Jersey, was steadily deteriorating after two years awaiting a transplant when doctors asked if he'd be their study's first volunteer. He was transplanted in June 2017.

"My first thought was saving my life," he recalled. "My next thought was, 'I'm the front-runner here. What I'm doing could open up a tremendous number of hearts to other recipients.'"