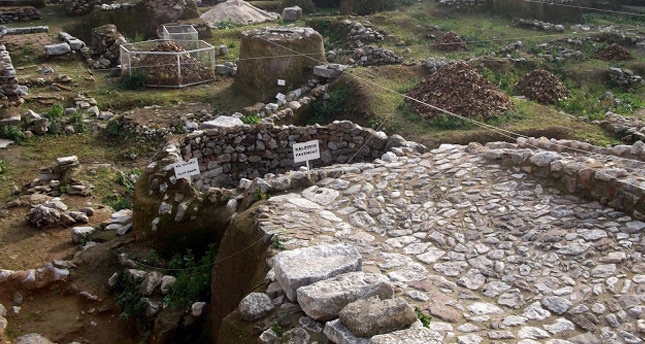 The first archaeologists focusing on the Ottoman era of the Balkans, Adnan Muftarevic and Mirsad Avdic of the Sarajevo Museum, contribute to the history of the region by discovering Ottoman artwork and buildings that have long been forgotten

The Ottoman Empire ruled over Bosnia and Herzegovina for over 400 years. When it lost all its territories in the Balkans with the Treaty of Berlin in 1878, the empire left hundreds of buildings behind, including mosques, inns, public baths and madrasahs (Islamic schools). Some of these treasures were either torn down or destroyed by the Austro-Hungarian Empire, the State of Slovenes, Croats and Serbs and Yugoslavia, which had inherited the lands from the Ottomans.

Muftarevic and Avdic, who are the founders of the 1894 Archaeologists Association, have been conducting archaeological excavations focusing on lost Ottoman heritage since 2005. The Bosnian archaeologists have unearthed more than 10 Ottoman buildings in Sarajevo, Bosnia and Herzegovina's capital, including discovering of the foundations of the Ebu I' Feth Mehmed Han Mosque - which was built in 1463 around Bijela Tabija in remembrance of the conquest of the city by Mehmed the Conqueror and mentioned in Evliya Çelebi's "Seyahatname" - as well as the Bakır Baba Mosque, which was built in the 16th century along with its madrasah, library and graveyard. The mosque and social complex were torn down during the Austro-Hungarian Era, discovered by Yugoslavia and the Bursa Metropolitan Municipality sponsored its rebuilding next to its original location.

Muftarevic, who graduated from the Department of Archaeology at Akdeniz University, has made a name for himself with his work across the Balkans, and said that he and Avdic, who graduated from the Department of Archaeology at the University of Sarajevo, have unearthed many Ottoman-era buildings that were completely destroyed. The archaeologists have conducted excavations in Bosnia and Herzegovina as well as Montenegro, and plan to expand where they work. Muftarevic underscored that if archaeologists in Turkey show interest in these excavations, they might conduct joint excavations both in the Balkans and Turkey to help discover lost Ottoman buildings. He said that the two mostly discover mosques and graveyards during their excavations apart from Ottoman madrasahs, public baths, inns and fortresses. The archaeologist drew attention to the destruction policies concerning Ottoman architecture in Bosnia and Herzegovina after 1878 and said the demolition, which began during the Austro-Hungarian period, continued during the State of Slovenes, Croats and Serbs as well as in the communist Yugoslavia eras.

According to Muftarevic, Bakır Baba Mosque, which was discovered by the Yugoslavian government along with the graveyard, madrasah, library and fountain, provide testimony for the size of the destruction. "This mosque was closed for prayer during the Austro-Hungarian period and used as an armory," Muftarevic said. In the following years, the mosque was badly destroyed by a fire, and although the madrasah, graveyard, library and the fountain survived the fire, the Yugoslavian government destroyed them in 1939. "Thanks to our efforts, a new mosque has been built in the area and we were able to include the foundations of the graveyard and library," Muftarevic added. Muftarevic and Avdic benefit from historical documents while they search for long lost Ottoman treasures. "'Seyahatname' helped us locate a mosque in Sarajevo, for instance," Muftarevic said. Located in Bijela Tabija, Ebu I' Feth Mehmed Han Mosque was discovered thanks to Çelebi's immortal work, as the building was not mentioned in any other historical document. During the excavations, the archaeologists were able to "reveal the truth," Muftarevic said.

Mutarevic emphasized that their only job is to reveal these historical buildings so that city officials can decide about their future. "However, according to the law, nobody can build anything on these sites," Mutarevic said, adding that officials have to decide whether these buildings will be restored or not. He also said that he and Avdic are working hard to make Ottoman archaeology recognized as a subfield of archaeology. Mutarevic said that archaeology is concerned with everything under the soil and that is why "Ottoman archaeology should be recognized as a science." He also stated that location of Bakır Baba Mosque's madrasah, library and graveyard is considered an archaeological park. Muftarevic claimed that the excavations they conduct are either financed by their association or by the Sarajevo Museum. Although Turkey does not contribute to the excavations, the country supports the restoration work on these buildings. While the archaeologists have been able to unearth many Ottoman buildings, they sometimes experience financial difficulties during the excavations. Describing the hardships they face, Mutarevic said, "For example, when we discover something, we first motivate the workers to finish the job before we run out of money. Sometimes municipalities finance us when we conduct archaeological excavations in their cities, but in small amounts, however." The Bosnian archaeologist stressed that they intend to establish an Ottoman archaeology museum, which will display Ottoman artwork, documents and information about archaeological studies, in the future and said that people who want to study this and related subjects will be able to conduct research in the museum. Muftarevic and Avdic began working at the Sarajevo Museum in 2001. Upon discovering that archaeologists in Bosnia and Herzegovina as well as throughout the Balkans only conduct excavations focusing on the period before the Ottoman Empire, the duo decided to focus on the buildings left behind by the Ottoman Empire.