Seljuk Sultan Alp Arslan’s tomb about to be found in Merv, say experts 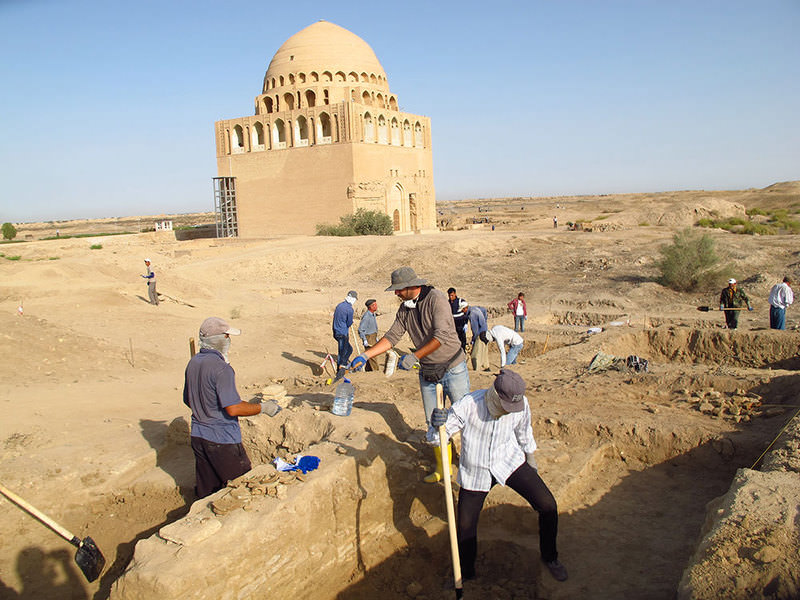 by Daily Sabah with AA
Apr 05, 2015 12:00 am
Crucial developments came to light regarding excavation efforts carried out by the sponsorship of Turkish Cooperation and Coordination Agency (TİKA) to find the tomb of the second Sultan of the Seljuk Empire, Alp Arslan, in Turkmenistan's historic city of Merv, also known as Mary.

Prof Dr. Osman Eravşar, one of the cochairs of finding Sultan Alp Arslan's tomb project and a professor in the Department of Literature in Turkey's Selçuk University, told the Anadolu Agency that a protocol was signed by Turkish President Abdullah Gül and his Turkmen counterpart Gurbanguli Berdimuhamedov to find Sultan Alparslan's tomb and initiate a tomb reconstruction project in March 30, 2013.

A workshop was organized by TİKA's initiative in Turkey before geophysical researches were made in the province of Merv. "We have found some tiles and architectural pieces. We think that they belong to Seljuk architecture. An epitaph found among those pieces is what excites us most. No matter how ruined it is, we could find out where the tomb is on condition that we find missing parts of the epitaph," Eravşar said.

Eravşar also emphasized that the project has been carried out following a comprehensive examination of resources which belong to the Middle Ages by numerous scientists. As a result of those examinations, the first scientific council was appointed to search for the exact place of the tomb. In this respect, mapping analyses were carried out. "For us, the previous committee has identified five different points about the possible place of the tomb. We read studies carried out before us to try to understand what has been done until now. Finding both resources, 'Where could this tomb be?' we asked, we had discussions about it. In fact, the medieval sources clearly say that Sultan Alparslan was buried into a Cuma (Friday) Mosque. Sources of the era show that Sultan Alp Arslan's funeral was brought to Merv and buried into the Cuma Mosque. With this in mind, we asked again 'Which Cuma Mosque could the Sultan be buried in?' Because there are three Cuma Mosques in Merv. One of them is Ben-i Mahan Cuma Mosque, the other one Mescid-i Atik and the last one is Macan Cuma Mosque."

Two other co-chairs, Professor Halit Çal from Gazi University and Professor Haşim Karpuz from Selçuk University were assigned for the project as well. Professor Çal also gave some technical information about the excavations, saying that, "15 scientists and 70 workers were appointed for the project as well as five scientists from Turkmenistan." Authorities from the Ministry of Culture of Turkmenistan are also a part of the excavations.

Stating that English and Russian scientists had also carried out some excavations to find the tomb, Eravşar said that what they found so far are small clues and highlighted that, "If we combine our information in the future with what we found now, we can say that we are very close to finding Sultan Alparslan's tomb. It is hard to say so for now, but we think that we are in the right place since we started excavating. We believe that we are looking for the tomb in the right place."

One another co-chair of the project, Professor Karpuz, also emphasized that they have already excavated 47 meters, adding, "Excavations will be carried out in two different periods this year, the first one will start in May. " He stated that after some regular excavations, they made huge progress within a year, while it normally takes fifteen years.