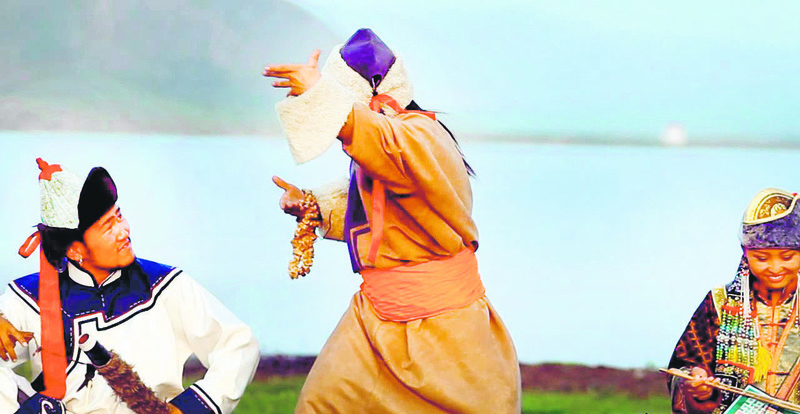 An ancient harp was found by a shepherd in Mongolia's Altai mountains. A replica was manufactured by Mongolian composer Ganpurev Dagvan and the instrument will be introduced to the world by the Altay Band

1,500 year old music instrument Altai Harp which was found in a cave in the Altai Mountains of Mongolia in 2008 will be introduced to the world by Altay Band.

The President of Eurasia Local Government Association Hasan Cengiz told an Anadolu Agency reporter that the 1,500 years old stringed instrument which was accidently discovered by a shepherd is being showcased at a museum in Mongolia. The replica of the music instrument was manufactured by Mongolian researcher and composer Ganpurev Dagvan and he found a music band to introduce the historical instrument to the world. Cengiz informed that they invited the band to Turkey and they made a detailed presentation on the Göktürk instrument to Turkish President Recep Tayyip Erdoğan. "The present showed great interest to the instrument. Culture and Arts Coordinator Orhan Karakurt told us that they can give concerts at the presidential palace when statesmen from Turkic countries visited Turkey. We are very happy," Cengiz went on. He noted that the Göktürk instrument offers its services to the humanity after 1,500 years thanks to the initiatives of President Erdoğan. The presidential seal is composed of 16 stars one of which represents Göktürks. "As far as I understand the president and the presidential palace has adopted this deeply. The western civilization characterizes the Turks as barbaric, warrior and settler but this discovery reveals that Turks were interested in music 2,000 years ago. We are working to tell this to the rest of the work," he concluded.

Dagvan who adapted the Altai Harp to present day said that the historical instrument was not found in one piece; however, its final appearance came into being following the study on the period.

Although it has been centuries, the Mongolian composer pointed out that many of the pieces of the instrument is still intact. He said they study on each hole on the instrument and they shaped the handle of the instrument as the horn of a mountain goat, being inspired from the motifs behind the original harp. Stressing that the Altay Band which was founded with six musicians in order to introduce the historical harp, Dagvan said, "All the members of the band are people interested in local arts of Mongolia. Our main objective is to introduce this music to the world." The musician stated that he has been conducting research on the subject for a while. "Mongolian people are familiar with this instrument however we came to Turkey to introduce it as it belongs to the Turks. I believe that this is not something belongs to Mongolians or Turks but to whole world heritage," he noted, adding he will continue to promote the Altai Harp to the world.
Last Update: Apr 17, 2015 12:30 am
RELATED TOPICS