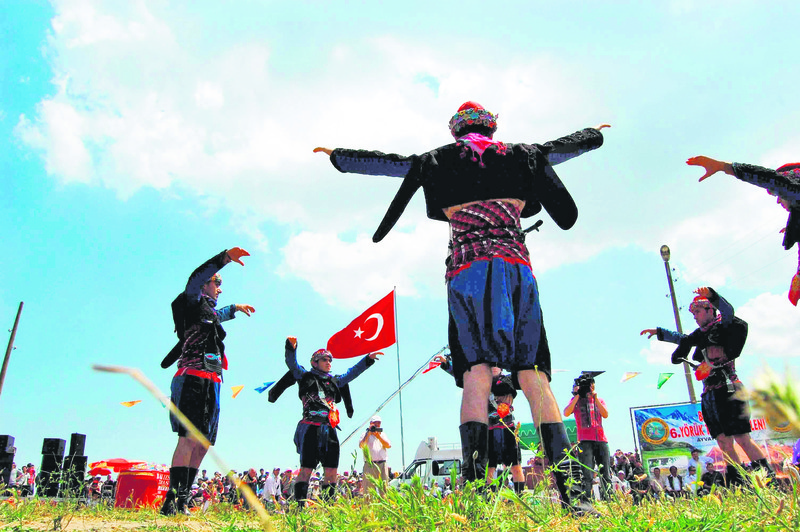 Turkey’s Balıkesir province, which has a huge population of nomads, will host a Nomads Festival that will take place from May 6 to May 10 and feature traditional music, and dance

Organized by the Balıkesir's Altıeylül Municipality, the Nomads Festival will feature traditional nomadic rhythms, dances and music called "türkü." For five days between May 6 and May 10, visitors will have the chance to experience the authentic nomadic lifestyle through music and dance performances. The festival will conclude with the performance of Zara, a famous traditional singer. Yörük does not refer to the name of a nation, tribe or clan. Among the tribes of Turks that migrated to Anatolia, those who settled are called "Manav," while others are called Yörük (Turkmen). The word "Turkmen" is an alternative name of the Oghuzes, which comprises 24 tribes: Kayı, Bayat, Akevli, Karaevli, Yazır, Döğer, Dodurga, Yaparlı, Avşar, Kızık, Beğdili, Karkın, Bayındır, Beçenek, Çavuldur, Çepni, Salur, Eymür, Alayuntlu, Yüreğir, İğdir, Büğdüz, Yıva and Kınık. Yörüks are generally named after the color of their animals, such as goats and sheep, or the head of their tribes such as Sarıkeçili, Tekeli, Saçıkaralı, Şıhlı, Akkoyunlu, Hacılı, Karaısalı, Rasullu, Hayta, Karakeçili and Akkeçili. The Turks who conquered Anatolia and formed an empire was a branch of the Oghuzes. This is because the Turks who first migrated to Anatolia were Yörüks. These nomads continue their life in Anatolia and Rumelia and earn a living through husbandry. They stay in hand-made tents on either highlands or plains, which changes according to the season. The term "Oghuz" refers to a courageous and strong person who can endure walking long distances. Similar to all nomadic communities, the Yörüks have military talents and can move fast and efficiently. They migrated to Anatolia for different purposes and took an active role during invasions. They also easily

settled down in certain areas, as they can rapidly arrange a population transfer from one area to another. The Yörüks and nomadic Turkmens played an important role to turn Anatolia into the home of the Turks. In the early years of the Ottoman Empire, they were also an essential part of military power. This was why the Yörük tribes were generally settled on borders to protect the country. The Seljuks and Ottomans carried out a systematic plan to settle the Yörüks. At first, their main task was to protect mountain passages and important gates. When the Ottomans reached Rumelia, a large amount of Yörüks migrated there. They were called "Evlad-ı Fatihan" (the children of the conqueror). When the Ottoman Empire lost its grasp over the Balkans years later, they returned to Anatolia and were called "muhacir" (immigrants). Following the decline of the Anatolian Seljuk State, Oghuz tribes established a "beylik" called the Karasids that existed from 1299 to 1364 near Balıkesir, Çanakkale and Bergama, which was the first Turkish state establish in the region. Karasi Bey descended from Danishmend Gazi and came to Balıkesir with a huge group of Yörüks, Turkmen and Chepni. Balıkesir is one of the places that are heavily populated by Anatolian Turkmens. The land of the Kadasids, which was located on the way to "Rumelian Door," was populated by the members of Oghuz tribes who wanted to or were forced to travel across Rumelia, especially before the conquest of Constantinople. The most populous Yörük tribe of Balıkesir is the Karakeçili Yörüks. Apart from them, Balıkesir is home to other Yörük tribes such as the Yağcıbedir, Kılaz, Kubaş, Yüncü, Hardal, Nacakçı, Şehitli, Kızılkeçili, Tahtacı, Akkeçili, Araplı, Burhanlı, Durabeyli and Kaşıkçı.
Last Update: May 04, 2015 11:55 pm
RELATED TOPICS