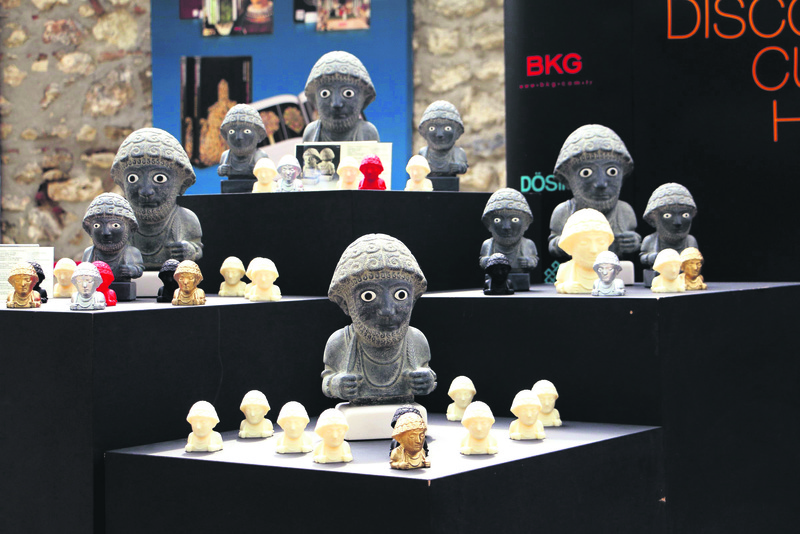 by Daily Sabah May 24, 2015 12:00 am
Discovered at Hatay's Tell Tayinat archaeological site in 2012, Hittite King Suppiluima's statue has been perfectly reproduced through 3-D printing, and replicas are currently on display at the Topkapı Palace Museum Store. Later, selected artifacts from the Museum of Anatolian Civilizations in Ankara and the Ephesus Museum in İzmir will also be reproduced and travel to various Turkish cities.

The Bilkent Culture Initiative (BGK), the largest museum store chain in Turkey, carried out the project as part of the Museum Week celebrations with its solution partner infoTRON. As a first in Turkey, replicas of the artifact were reproduced through 3-D printing at Topkapı Palace to promote cultural heritage among local and foreign tourists.

Orhan Hallik, a board member at Bilintur, said in a press meeting that the International Council of Museums announced the May 18 Museum Day's theme as "museums for a sustainable society." "For the last six years, BGK has been working to transfer Turkey's cultural richness to future generations. While realizing our projects, we consider current necessities and decide how we can combine them with history," he said. Hallik said they gathered technology and history for this project with infoTRON and will continue it in other museums. "The nations, civilizations and states that flourished in this land for centuries did not just leave a tangible cultural heritage. They instilled their love, sorrow, happiness and hard times. The BGK protects not only this heritage, but also their feelings and values and aims to make tourists do the same," he said.

Burak Pekcan, the CEO of infoTRON, said their company has rendered production, training and consultation service in the field of 3-D technology for over 20 years. "So far, we have had the chance to contribute to the design and production processes of different industries from medical to aviation sectors. We took a new step and have begun to transfer our cultural and historical heritage to a digital platform through 3-D printers," Pekcan said. "It is now possible to take home a replica of a historic statue," he added.

Displayed at the Hatay Archaeology Museum, the original statue of Hittite King Suppiluima is 1.5 long meters and weighs 1.5 tons. Having ruled in the Neo-Hittite period, Suppiluima is known as the commander of the first naval war recorded in history. Made of basalt, the statue depicts him with a beard, curly hair and necklaces on his wrists. He holds a shaft of wheat in one hand and a spear in the other. The eyes of the statue were made of limestone and steatite.
Last Update: May 25, 2015 12:52 am
RELATED TOPICS