A 2,000-year-old ruby ring discovered in a woman's grave in a burial mound during archaeological excavations in Malatya in 1989 still dazzles with its magnificence 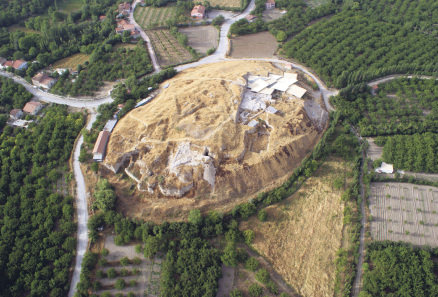 The burial mound near the Yenice region of the Darende district was discovered in 1989. After the soil was removed, a glass vase, glass bowls, a ring, earrings, earplugs, a tape to close the mouth and a man's ring were discovered in the burial chamber. The artifacts unearthed at the excavation site were brought to the museum. 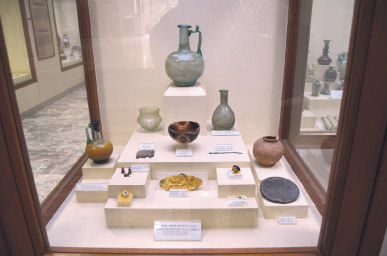 During an archeological excavation in 1989, a ruby and gold ring was found on the skeleton of a woman in Malatya. The ring is believed to date back to the Roman era. Archaeologists and experts think that the ring was given by a man to his wife as a "death present," as it has a small portrait on it.

In a statement to Anadolu Agency, the manager of Malatya Museum, Tevhit Keke, said the burial mound near the Yenice region of the Darende district was discovered in 1989. Kekeç said that the archaeologists reached the burial chamber following a rescue excavation in the burial mound and came across a woman's skeleton that was largely preserved. "After the soil was removed, a glass vase, glass bowls, a ring, earrings, earplugs, a tape to close the mouth and a man's ring were discovered in the burial chamber. The artifacts that were unearthed at the excavation site were brought to our museum," he said.Explaining that the artifacts that were discovered date to the first century B.C., Kekeç said people were buried with their favorite foods, clothes and ornaments during that period. He said that as the woman was buried in a wooden coffin, it was separated from the burial mound and the discovery is an example for the region's archaeological record. "The woman being buried in a wooden coffin with her belongings indicates that she was an important person and was loved dearly. I wish there was an inscription in the burial mound like the other ones. We could only determine that the tomb dates to the first century B.C., thanks to the artifacts unearthed in the burial chamber.

Kekeç said that the ruby ring was found on the chest of the woman, explaining: "This shows her husband's love and loyalty for her. It was believed that if the person who died receives a present from his or her spouse, it makes them happy." He said there are other examples of this kind of demonstration of affection, and gave an example of a tomb found in the west of the country that contained a half-eaten apple. "In this tomb, the husband of the dead woman gave the ring on his finger to her," Kekeç said.

Kekeç said that the portrait on the ring is an object of discussion, as some scientists believe it belongs to a man while others hold that it is a portrait of a woman. Pointing out the importance of the portrait, since it was engraved on a ruby, Kekeç said: "It is important because it is very small, which would need excellent craftsmanship. Other rings with portraits carved into their stones have also been found at different excavation sites around Turkey. Most of them feature portraits of Demeter, Hera or Zeus, but this ring shows us that the industry for ring engraving was formed and was developing."
Last Update: Jun 01, 2015 11:47 pm
RELATED TOPICS