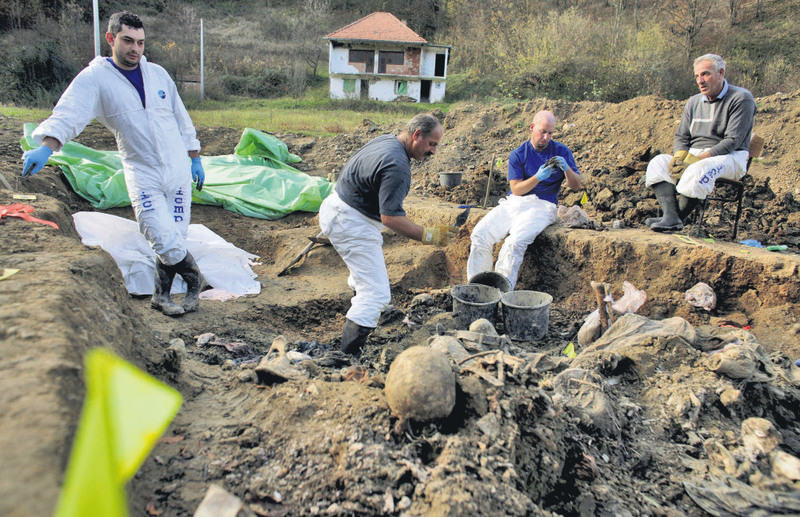 Forensic experts of the International Commission for Missing Persons (ICMP) search for human remains in a mass grave in the village of Kamenica
by Daily Sabah with AA Jul 10, 2015 12:00 am

This week Bosnians commemorate the Srebrenica massacre, a tragic event that cost the lives of more than 8,000 Bosnian men and boys. Even though Bosnian suffering is most often linked to Srebrenica, there were many other incidents of exile, torture and mass killings in different cities of Bosnia-Herzegovina between 1992 and 1995

Alongside the Srebrenica massacre – the biggest human tragedy following World War II, which killed more than 8,000 Bosnian men – Bosnians suffered from exile, torture and mass killings in various cities of Bosnia-Herzegovina, such as Sarajevo, Visegrad, Prijedor, Zvornik, Bijeljina and Foca. The bloody war broke out after Yugoslavia proclaimed its independence following the 1992 referendum with the breakup of the country. Until 1995, almost 100,000 civilians, 60 percent of whom were Bosnians, died. Around 50,000 women were raped and 2 million people have had to leave their homes.

After the onset of the war, Serb forces laid siege to Sarajevo, which lasted for around three-and-a-half years – the longest siege of modern history. While more than 10,000 civilians died during the siege, more than 50,000 people were injured. Moreover, 100,000 buildings were destroyed in Sarajevo, which was exposed to 329 bombings every day on average.

The attack to the bazaar in Markele, which was located in the city center, is one of the first massacres that comes to people's minds. During the first attack orchestrated by Serb forces on Feb. 5, 1994, 68 people died and 144 people were injured. On the second attack on Aug. 28, 1994, 43 people lost their lives while 84 were injured.

Many large and small concentration camps that were opened starting from the first year of the war became the last stop for thousands of Bosnian men. According to data from the Association of Concentration Camp Torture Survivors, 657 concentration camps were opened throughout the country, and nearly 30,000 lost their lives in those places. In the death camps spread around the country, along with the most famous concentration camps such as those in Manjac, Keraterm, Omarska, Trnopolje, Dretelj, Gabela, Heliodrom, Luka, Batkovic and Kula, nearly 200,000 people were tortured and 25,000 women were raped. People who were killed in the concentration camps were buried in mass graves around the country. When the war was over, survivors began to work in order to find the missing people as soon as possible. So far, graves of 20,000 Bosnians have been discovered; however, the bodies of 7,324 victims are still missing. Between 1992 and 1995, 5,209 Bosnians, including 4,093 civilians, were killed in Prijedor, in which there were many concentration camps.

Located in central Bosnia-Herzegovina, Travnik witnessed two of the biggest massacres of the war. The 224 Bosnians who were taken to Travnik from the Trnopolje Concentration Camp in Prijedor were killed by Serb troops near the Koricanske Stijene region on Aug. 21, 1992. Twelve people who managed to survive this massacre were brought to court in The Hague to testify against Radovan Karadzic, the former leader of the Bosnian Serbs. The bodies of the 118 Bosnians killed in Koricanske Stijene have yet to be found after 23 years.

Another huge massacre near Travnik took place in Ahmici. On April 16, 1993, the Croatian Community of Herzeg-Bosnia came to the village of Ahmici and murdered 116 Bosnians, including 43 women and children.

Located in eastern Bosnia-Herzegovina, the city of Zvornik was one of the places that witnessed the first mass murder and violence committed against Bosnians. The operation in the city was initiated by the Yugoslav People's Army on April 9, 1992. "Arkan," the code name for Zeljko Raznatovic's Serb volunteer guard, commonly known as "Arkan's Tigers," and other Serb paramilitary troops killed many Bosnians during the operation. Following the attacks in Zvornik and other nearby neighborhoods, many families were rounded up and murdered, thousands of people were taken to concentration camps and numerous Bosnians had to leave their homes. While many of those who were kept in concentration camps were killed and buried in mass graves, the bodies of only 1,200 people have been discovered. Furthermore, 1,500 Bosnians who are presumed dead are still officially missing. Serb soldiers under the command of Raznatovic, conducted huge massacres against Bosnians in Bijeljina in 1992, murdering an estimated 500 Bosnians.

Massacres in Visegrad and Foca

Another city that witnessed huge massacres was Visegrad. Although the city was intensely inhabited by Bosnians, the Bosnian community became the minority in the region following the war. In Visegrad, Serb troops massacred, tortured and expatriated 1,700 people, and 14,000 people had to abandon their homes.

Among the many mass murders in Visegard, probably the most tragic one took place at an apartment on Pionirska Street in 1992. Here, soldiers locked 59 civilians, including a two-day-old baby, in one of the apartments. The Serb troops threw grenades into the apartment and then set the entire apartment building on fire. The soldiers who were waiting outside the apartment executed the people who ran away from the fire to save their own lives.

A similar incident also took place on the same street. There, more than 70 Bosnians, including women and children, were locked in a house belonging to the Alic family and Serb troops torched the house. Very few people were able to survive this massacre. The Bosnians living in Foca, which was previously known as Srbinje (the city of Serbs), experienced ethnic cleansing, mass murder and torture throughout the war. As a result of the mass murders in Foca, 1,900 Bosnians are presumed dead and 850 Bosnians are still missing.
Last Update: Jul 10, 2015 9:25 pm
RELATED TOPICS