Incomplete ancient temple to be restored 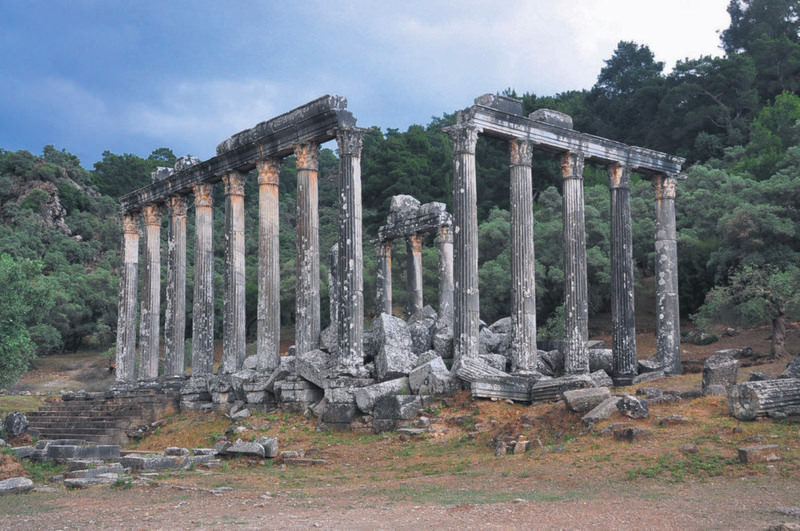 Restoration of the Temple of Zeus located in Muğla province is in planning in compliance with the original. It is thought to have been left incomplete due to an economic crisis that occurred about 1,800 years ago

Located in the ancient city of Euromos in Muğla's Milas district, the Temple of Zeus (Lepsynos) will be restored by a group of specialists from Turkey, France and Italy. The temple is believed to be unfinished due to the economic crisis that hit the ancient city 1,800 years ago. President of Muğla Cultural and Natural Heritage Preservation Board and Euromos Ancient City Excavations Assistant Professor Abuzer Kızıl, explained that 16 columns of the temple are still standing tall. He said the columns that face the city are decorated with fluting, but the columns on the southern side of the temple were not decorated, which indicates that the city was suffering from economic difficulties.

Kızıl said that they will start restoration works by locating the architectural blocks that are not standing today. "First of all, we are documenting the blocks that are not here. Professor Ümit Serdaroğlu carried out cementation work in 1975 in order to restore the temple, but this structure will challenge us. Our main supporters are the Ministry of Culture and Tourism and the Directorate General of Cultural Assets and Museums."

Kızıl claimed that the temple could not be finished with the ancient city's budget and continued, "Euromos's budget was not large enough to finish the temple. The wealthy people of the city erected several columns, but it was not enough. We want to erect some of the unfinished columns and finish the construction as we restore the whole temple. We will raise the temple up as much as we can."

Explaining that the standing columns feature plates with the names of the people who contributed to the construction inscribed, Kızıl stressed that the temple was dedicated to Zeus. He said that Lepsynos is one of the best preserved temples in Anatolia. "We are currently evaluating the situation with a team of six people coming from Turkey, France and Italy," Kızıl added. He said that they will not spoil the "magical atmosphere" of the ancient city and highlighted that they will not piece together the unfinished columns with other materials.

Kızıl said that they have to be careful about disturbing the standing columns while they are restoring the temple because "they might fall down even with the smallest vibration." The head of the excavation and restoration said that they might receive support from other Turkish and international institutions. "If we successfully restore the temple, it will be a matter of Turkish pride," Kızıl said. The temple, which is located within the site of Euromos Ancient City is situated along the Milas-Söke highway. The temple dates back to the second ‎century A.D., and is believed to have been built during the reign of Emperor Hadrianus.
RELATED TOPICS