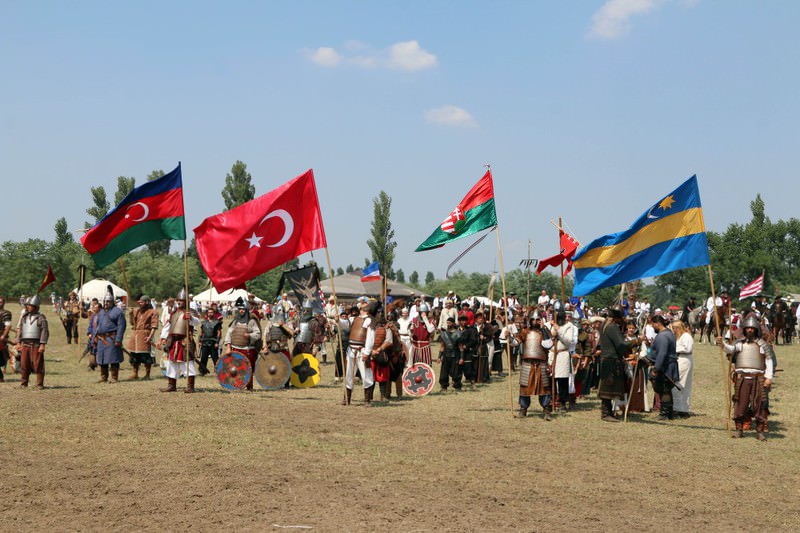 by Anadolu Agency Aug 18, 2015 12:00 am
The Hungarian Turan Foundation organized "Ancestors Day" with contributions from the Turkish Cooperation and Coordination Agency (TİKA) in the Hungarian city of Bugac. Speaking at the event, Turkey's Ambassador to Budapest Şakir Fakılı, said the Hungarian Turan Foundation re-animates history. "We consider our Hungarian brothers as our relatives in Turkey. It makes us happy to see that Hungarians see us as friends and relatives in return," Fakılı said. TİKA Vice President Mehmet Süreyya Er also spoke at the event and said the commemoration events that took place during "Ancestors Day" are similar to those organized in Central Asia, further demonstrating that the two countries share the same history and roots. Honorary Consul of Hungary in Kayseri, Osman Şahbaz, said the event in Bugac drew attention from people in Turkey as well as people from all Turkic republics. "We re-live the deep traces of the past that were left by our ancestors. It is a great thing for Turkey as well as other Turkic republics that an event such as this is organized in a European country. It is very important that TİKA supports this event as well," Şahbaz said.

Many people who came from different parts of Hungary and other countries to commemorate Attila the Hun, the ruler of the Huns, erected stands and had a chance to introduce their own cultures. Moreover, a 20-meter-tall tent was erected in honor of Attila. Many participants who wanted to camp in the area also erected tents similar to traditional Central Asian nomadic sites.During the program, the traditions, entertainment and the living conditions of the nomad tribes was reenacted. Weapons display and horse shows took place in the morning while participants held concerts and other shows in the evening. Apart from the Kazakhstan, Azerbaijan and the Turkish Republic of Northern Cyprus ambassadors to Hungary, the director of the Budapest Yunus Emre Cultural Center, Yakup Gül, was also in attendance at the event.
RELATED TOPICS