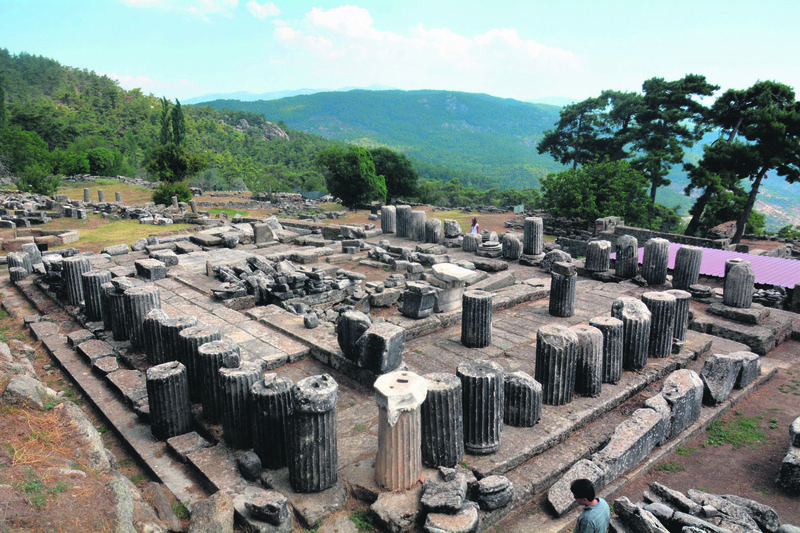 by daily sabah
Aug 29, 2015 12:00 am
The excavations in the ancient city of Labraunda, one of the oldest cities of the Caria civilization, have unearthed important buildings in the city. The excavations are taking place at eight different locations under the supervision of Associate Professor Olivier Henry of the Anatolian Research Institute, the head of the Science Committee of the excavations. Apart from Turkish archeologists, 50 experts from Greece, Colombia, the U.S., U.K., France, Romania, Bulgaria, Slovakia and Sweden are overseeing the digging.

Co-head of the Labraunda excavations, Assistant Professor Ömür Dünya Çakmaklı, told Anadolu Agency that the excavations are continuing near the Hellenistic monument fountain, dating back to the fourth century B.C., the Roman public bath, andron (a building that is reserved only for men) - the best preserved building on the site - the mausoleum and the acropolis.

Labraunda was one of the most important holy places in Anatolia during antiquity. As it is a center for both religion and politics it stood out among other cities of its time in present day Muğla as well as the entirety of Anatolia. The excavations in the ancient city have been carried out since 1948. Although there were some pauses, the site has been excavated for almost 70 years. Henry has been the head of the excavations for three years and the nine other countries except for Turkey have been participating in the excavations. Highlighting that the excavation continues with contributions from the Culture and Tourism Ministry, Çakmaklı said: "The excavations continue in eight different locations. The digging for the acropolis and public bath has been carried out for many years now."

During the excavations, archeologists managed to unearth a huge, glorious fountain that they call the "New Western Fountain." They also discovered and registered another monumental fountain near the southern gate of the ancient city. Çakmaklı said that the restoration of the findings goes in parallel with the discoveries.

Çakmaklı said that they discovered new pools near the entrance of the holy site of the city. "Registration, restoration and conservation works are also carried out at the site. A laboratory is planned to be built in order for experts to work more easily," added Çakmaklı. As "water of Labraunda," which is still used in the region near Milas, was very important during the heyday of the ancient city, it has not been surprising to unearth so many structures related to water. "The water in Labraunda is very important," Çakmaklı said. "It is important as it was considered holy. It makes us really happy to discover structures related to water. There are numerous fountains or monumental structures along the way to the holy site in the city." She further informed that they unearthed an oven for the first time since 1948 and the analysis of this new discovery is still being processed.
Last Update: Aug 29, 2015 1:25 am