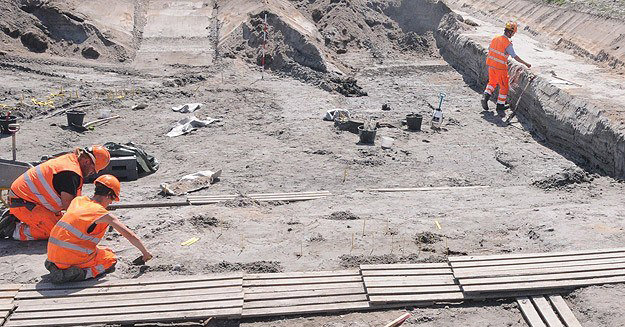 by Daily Sabah Sep 03, 2015 12:00 am
Archaeologists believe the recently discovered mosque in Wünsdorf to be the oldest one in Germany. According to a statement released by the Free University of Berlin, archaeologists found the remains of the mosque at an excavation site 60 kilometers outside of Berlin. The archaeology team - under the supervision of Professor Reinhard Bernbeck and Professor Susan Pollo - speculate the mosque to be around 100 years old.

The digging team located nails belonging to the wooden dome of the mosque as well as green and blue glass pieces believed to have been used for the windows. Archaeologists were not able to recover any other materials because the mosque has been built over multiple times since its destruction sometime in 1925 or 1926. However, Professor Bernbeck was still able to date the mosque back to 1916 using the artifacts and building remnants they found. The wooden mosque was first built inside the Halbmondlager, a prisoner camp for 4,000 African and Asian Muslims. After the mosque was destroyed, the site housed military facilities for the National Socialist Party and later the Soviet Union following World War II. Bernbeck added that they also identified parts of destroyed Soviet tanks and other war artifacts around the excavation camp.
Last Update: Sep 03, 2015 8:37 am
RELATED TOPICS