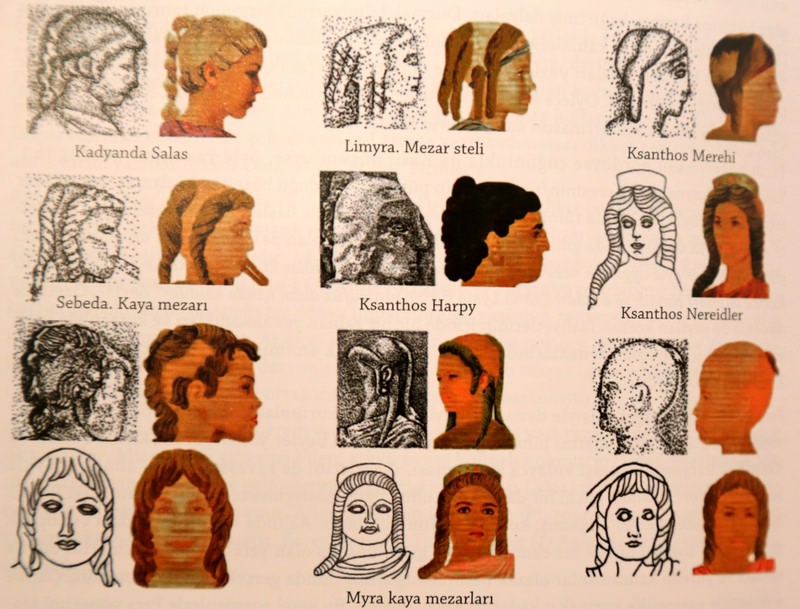 by Daily Sabah Sep 18, 2015 12:00 am
An archaeological team examining archaeological findings discovered ancient hairstyles. Reliefs found on rock tombs reveal the extravagant braided hairstyles of women living 2,400 years ago, which by today's standards might be considered strange. Professor Nevzat Çelik of Akdeniz University Archaeology Department said it is possible to understand the lifestyle of people living during this time by examining ancient buildings and artifacts found in Lycian tombs. Following a comprehensive study, the team found new information about Lycian lifestyles and social hierarchies.

Many female masks and figures that adorned old city structures have been analyzed. "The color and pattern of descriptions were not thoroughly understood before. New findings allow us to make them more explicit," he said. Çevik said Isabella Benda Weber of Vienna-based Austrian Archaeology Institute revived this hairstyle through her drawings. "These ancient hairstyles of women are reminiscent of those seen among hippie and punk fans. They look unusual. I mean, although these hairstyles now look extraordinary, they were preferred by wealthier women as we found them on rock tombs belonging to rich and well-to-do families," he said, adding that the ancient artifacts tell the life of the elite. "However, fashion is for everyone and we can say that local people also used them." Mehmet Kayhan Murat, the vice excavation head of the ancient Myra city, also said lifestyles have been evolving over the years. "Everything we have from shoes to clothes have evolved and come to our age. The human brain does not change but we pass through different periods. Hairstyles are examples of this," he said.

In ancient times, women used to comb their hair toward the back and their hair looked frizzy. "There are people adopting the same hairstyle today," Murat said, adding that ancient women had balls of hair and used a kind of hair curler to do their hair.
RELATED TOPICS