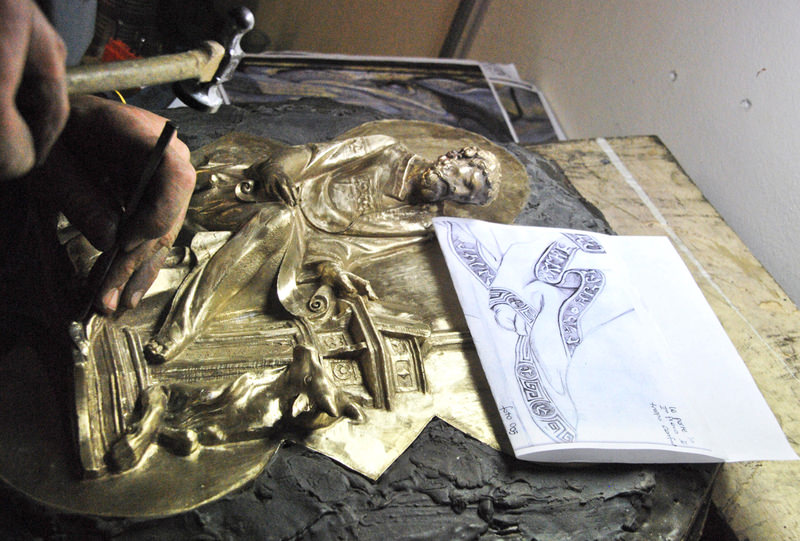 by Associated Press Nov 24, 2015 12:00 am
A team of artisans on the outskirts of Florence are casting the final panels of a replica of a Renaissance masterpiece: Lorenzo Ghiberti's famed bronze north doors on the Florence Baptistery. The work is in preparation for the doors' installation in place of the original at the end of January. Ghiberti took five times as long, over 20 years, to make the original bronze doors comprising 28 panels, each depicting a New Testament scene, completing it in 1424. The centuries took their toll and a buildup of dirt and grime made them difficult to appreciate. The original underwent a 2 1/2 -year restoration before being put back on public display last month, indoors at the New Museum of the Opera del Duomo. The replica, which has been painstakingly created from 3 1/2 tons of bronze, will be the permanent stand-in at the octagonal baptistery.

Chief artisan Jacopo Ciglia said the biggest challenge was precisely replicating Ghiberti's artwork, working from drawings and photos, as well as the original. "We have studied, for example, how Ghiberti interpreted eyes, how he interpreted hands, how he interpreted feet, the belly button of Jesus Christ on the panel with the Crucifixion was really difficult," he said. The final details are chiseled by hand. Master artisan Andrea Romanelli proudly demonstrated how he chiseled a curl in the hair of an apostle in the panel of "The Last Supper," a panel that he said required painstaking toil all around the work due to hidden corners beneath the frame where Ghiberti included details like a mouth, eyes and a chin. "All these details that need to be done identically to Ghiberti's panel," he said. The restoration is being paid for by a fund-raising campaign that identified donors across the globe, each willing to pay 150,000 euros to help restore a single panel a scheme that echoes similar projects in other Italian cities to restore cultural treasures.
RELATED TOPICS