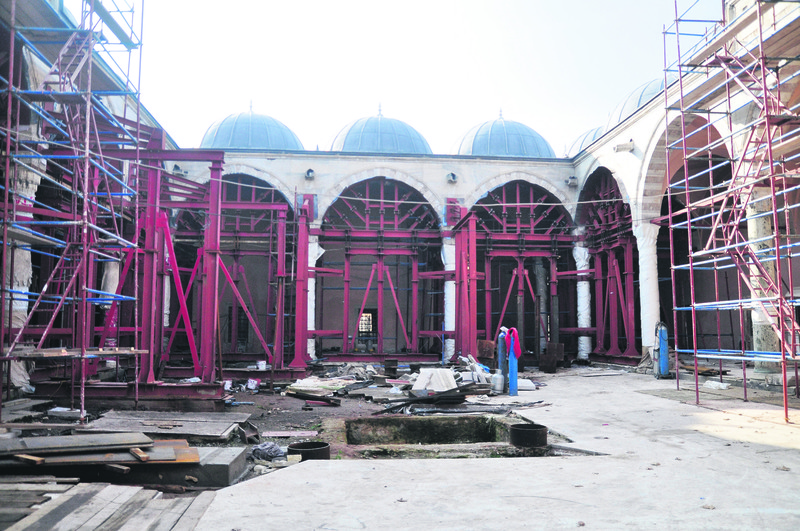 A tabhane, a kind of sanatorium for ill people during rehabilitation, in the Süleymaniye Complex designed by Mimar Sinan, is currently under restoration

The Süleymaniye Complex, which was built between 1550 and 1557 by Mimar Sinan upon the orders of Ottoman Sultan Süleyman the Magnificent, is currently under restoration. Experts are currently renovating one of the most important buildings of the complex, the Tabhane, which was used as a recovery center for patients five centuries ago. During this restoration project, experts have discovered an oven, a cistern and a ventilation system which were used for medical purposes.

Project consultant Vahit Okumuş who has been overseeing restoration efforts for the last three years, offered his insight about the Süleymaniye Complex project to an Anadolu Agency (AA) correspondent. Okumuş said that the historical building has been used as mint, an Islamic art museum and a storage room throughout history. He also said that the Tabhane building will be used by the Istanbul Provincial Office of Mufti once the restoration works are finished. When the renovation of the Süleymaniye Complex's Tabhane building first began, the restoration team believed that maintenance of the plaster on the walls would be enough to make the building inhabitable; however, further investigation revealed that the column heads need to be changed as well. Once the team began to investigate the building in detail, experts discovered a cistern. They also discovered that the ventilation system of the building needs to be repaired, the toilets need to be fixed and the stables require renovation. As a part of the restoration project which kicked off three years ago, renovation efforts are focused on the rotten stone blocks which are the façade of the building and the broken marble blocks on the floors. Part of the garden which was altered back in the day has been converted to its original for. The "şeşhane" bricks were laid on the floors of the rooms. Moreover, the electrical wiring and water plumbing of the building have been reinstalled in order to prevent any damage to the historical building. According to Okumuş, each corner of the building has been renovated while staying faithful to its original structure. Okunmuş also mentioned the oven that was discovered during the restoration. He said that they did not understand what purpose the oven served, at first. To shed light on their discovery, the restoration team consulted various experts. Following their investigation, restorer Ahmet Selbesoğlu helped solve the mystery: According to Selbesoğlu, the oven was used to heat up sand which was used for medical purposes to heal patients.

The oven was fired up from outside and the hot air went into treatment rooms heating up the sand on the floor. The patients were treated by laying down on the floor, on the hot sand. "When we studied the floor," Okunmuş said, "it was covered with something. After we cleaned it up, we discovered sand on the floor and understood that this was the place where patients were treated for their illnesses." The restoration team covered the oven and the floor with glass in order to preserve the area. In order to provide historical information to visitors, an info board will also be put up. Okunmuş said that the column heads became worn in time and they had to restore and strengthen them. "Even the slightest movement in the arch might cause irreversible damage. One might not realize it at first; however, the damage reveals itself in time. We called authorities from the Council of Monuments before taking down the first column head as we want everybody to see whether the column head could be restored or not," Okumuş noted. The restoration team will remove six more column heads for restoration and they will also add an arch in order to preserve the balance of the gallery. Although the building underwent restoration in the past, those projects were not detailed, according to Okumuş. "Although the Council of Monuments asked us to restore all the columns, it will be a hard task given the state of the columns which were damaged over time," he added. Okunmuş said they also discovered a cistern under the historical building. The water in the cistern under the Tabhane was brought from the cistern of the Süleymaniye Mosque. The restoration team plans to open a water canal and connect it to the general water plumbing system of Istanbul. The decorative pool in the garden is also connected to the cistern under the Tabhane and, according to Okunmuş, they will restore the pool as well. The ventilation system of the historical building has also been cleaned. Okunmuş said they plan to finish restoration of the Tabhane building in three to four months; however, he added that the timetable might change given the bureaucratic problems raised by the restoration of the columns.
Last Update: Dec 21, 2015 10:54 am
RELATED TOPICS