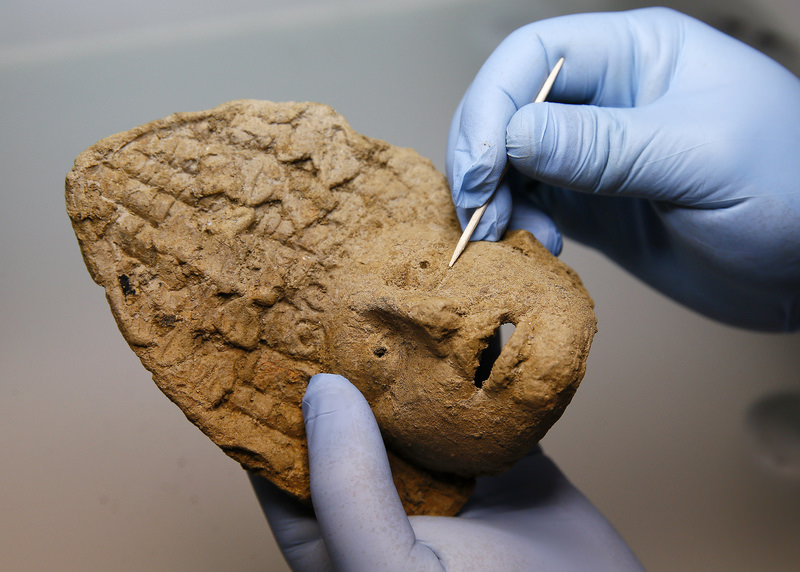 by Daily Sabah Feb 09, 2016 12:00 am
A 2,000-year-old burial chamber has been discovered near the archaeological site of Tralleis during the first day of a drilling project led by the Aydın Museum to preserve the protected area. The burial gifts that were unearthed in the chamber shed light on the cultural life of the period. Speaking to Anadolu Agency (AA), Aydın Culture and Tourism Director Nuri Aktakka said the city of Aydın has been an important settlement for mankind since the beginning of recorded history, adding that the region has been home to various civilizations for centuries.

Located in southwestern Turkey, the city of Aydın bears the traces of civilizations, which dates back 7,000 years. There are 22 registered ancient sites in Aydın, and Tralleis is one of the most important ancient cities in the region. The burial chamber offers information about the professions and hobbies of the people who were buried there. Since the discovery of the burial chamber, a team of 10 archaeologists has been hard at work at the site, unveiling various objects in the burial chamber.

The director of the Aydın Museum, Yılmaz Akkan, said police officers are monitoring the archaeological site to protect the burial chamber as well as the artifacts it holds from looters. "We discovered three coffins in a rectangle vault," Akkan said. "The bones that we unearthed were damaged; however, the burial gifts that we discovered in the vault were a huge finding." So far, the archaeologists have listed and registered a total of 37 objects excavated from the burial chamber. Among these objects, cremation boxes, teardrop bottles and oil lambs stand out. A baked clay mask that was discovered among the burial gifts is perhaps one of the most important pieces to be discovered. The mask provides information about the people whose bodies were buried in the chamber. "We believe that a person who is interested or involved in theater - or any other form of art - is lying in this chamber," Akkan said, adding that no other masks have been unearthed in the excavations conducted in Aydın. The artifacts, which date back to the early Hellenistic period of the Roman Empire, will be included in the Aydın Museum collection once their cleaning and conservation processes are finished. The fate of the site where the burial chamber was discovered will be decided by the Cultural and Natural Heritage Preservation Board.
Last Update: Feb 09, 2016 1:35 am
RELATED TOPICS