30 million yr-old amber-entombled flower may have been toxic 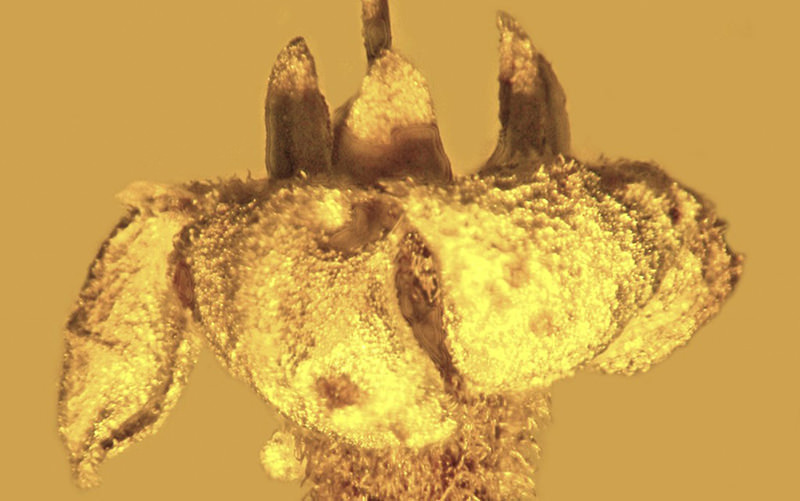 The flower, Strychnos electri, encased in amber, is shown in this handout photo provided by George Poinar of Oregon State University February 15, 2016 (Reuters Photo)
by Feb 15, 2016 12:00 am
Do not let its beauty fool you. A newly identified and exquisitely preserved flower found entombed in amber - fossilized tree sap - may have packed quite a punch.

Scientists announced on Monday the discovery of the flower that lived 20 million to 30 million years ago, named Strychnos electri, inside amber dug out of the side of a mountain in the Dominican Republic.

It was a member of a group of flowers that are today the source of the poisons strychnine and curare. According to the researchers, it also likely boasted toxic compounds.

The scientists found two examples of the small tubular-shaped flower, measuring roughly four-tenths of an inch (10 mm), in the tan-colored amber, and were amazed at the remarkable state of preservation, among the best of any fossil flower.

"These amber pieces are like time capsules, a frozen moment of life that we can now relive and study," Rutgers University botanist Lena Struwe said. "The flower is incredibly well-preserved, not distorted, not compressed, not fragmented into pieces, but looks like it just fell off its branch and dropped into sticky resin."

"Fossil flowers are rare under any circumstances," Poinar said. "And those in amber provide the only evidence of (ancient) tropical flowers, since the rapid decay of such delicate objects under conditions of high heat and humidity prevents their preservation in sedimentary deposits," the type of rock in which fossils are found.

Amber represents a rich source of entombed fossils dating back as far as 130 million years, including mosquitoes and sand flies, spiders, millipedes, ticks, frogs, lizards and salamanders. In the book "Jurassic Park" and the movies it inspired, it was blood taken from the guts of mosquitoes that provided the DNA needed to create dinosaurs.

Strychnos electri is part of one of the three largest evolutionary lineages of flowering plants, known as the asterids, which also includes the sunflower, potato, coffee and mint families.

"That this piece of amber has survived this intact for so many millions of years and then was found and ended up in our hands to be used for research is serendipitous and fantastic," Struwe said.

The research was published in the journal Nature Plants.