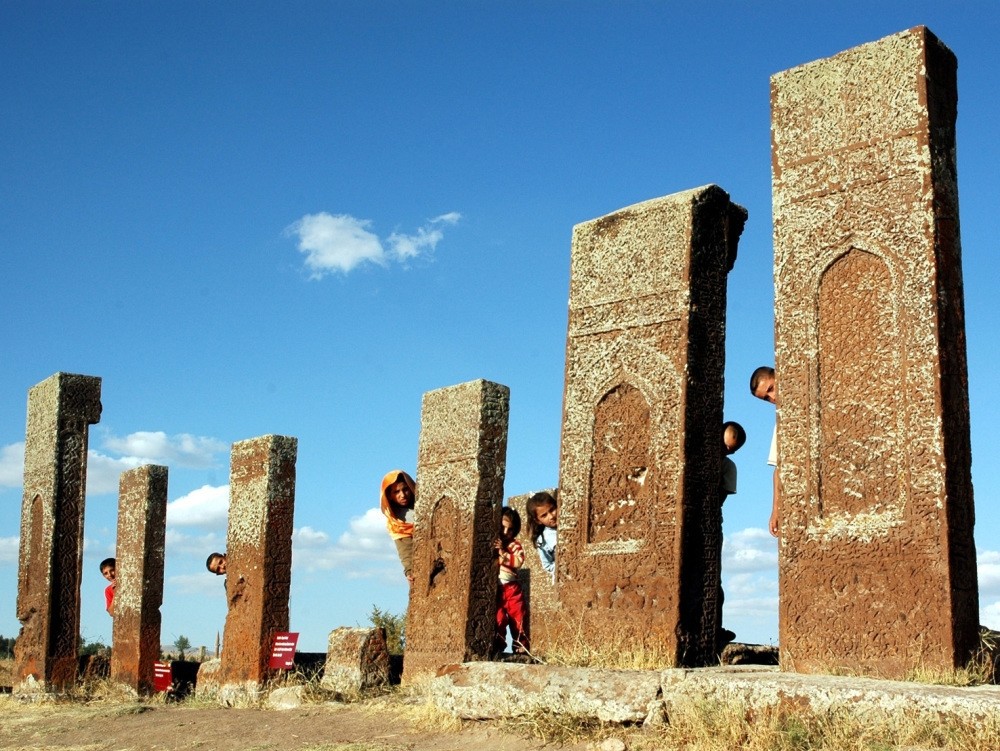 Ahlatu2019s art can be seen in many structures in Anatolia, and ceramic furnaces in the city were produced in the most important ceramic production centers of the Islamic world.
by Daily Sabah Jun 02, 2016 12:00 am
Associate Professor Celil Arslan from Erciyes University Faculty of Letters Department of Art History said that the style of Orkhon inscriptions can be seen on tombstones in a cemetery located in Ahlatin, the province of Bitlis. "We see the same logic of Orkhon inscriptions in Ahlat, featuring an Islamic style. Tombstones and domes are the best examples of this style. The works in Ahlat are milestones of Anatolian culture; they are very important in terms of indicating continuity and permanence."

Speaking to Anadolu Agency (AA) at the 38th International Excavation, Research and Archeometry Symposium in Edirne, Arslan has conducted various studies on Ahlat, emphasizing that the historic district is substantial in terms of revealing an urban understanding of Turkish culture and being one of the science and culture centers of the Medieval Islamic world.

Stressing that Ahlat's demographic details should be revealed during excavation works, Arslan said: "Hosting many high-level cultures and civilizations throughout its bright history, Ahlat is still one of the important historical cities in Turkey for its preservation of many works and tablets. The walls surrounding the city, the structure within the walls and the works that are likely to be found in the regions where excavations works are still ongoing should be unearthed. Frankly, the medieval city of Ahlat should be put forward. We will see the depths of our city by putting the texture of the Medieval Ahlat city forward."

He also noted that the craftsmen, stonemasons and architects trained in Ahlat have made great contributions to the Islamic world, adding that Ahlat's art can be seen in many structures in Anatolia and that ceramic furnaces in the city were produced in the most important ceramic production centers of the Islamic world.

Indicating that Ahlat has been home to more than one dynasty over the ages, Arslan pointed out that the tombstones in Ahlat include those belonging to members of the Ahlatshah dynasty, the Ayyubids, and the Ottomans.

Emphasizing that we should protect our values, Assoc. Prof. Dr. Arslan continued: "Several issues needed to be emphasized. We should inform the public about this. We should find sponsors responsive to history, not just within the Culture Ministry's budget. Our people should be more sensitive to our rich history and feel a sense of moral responsibility for these structures."
RELATED TOPICS