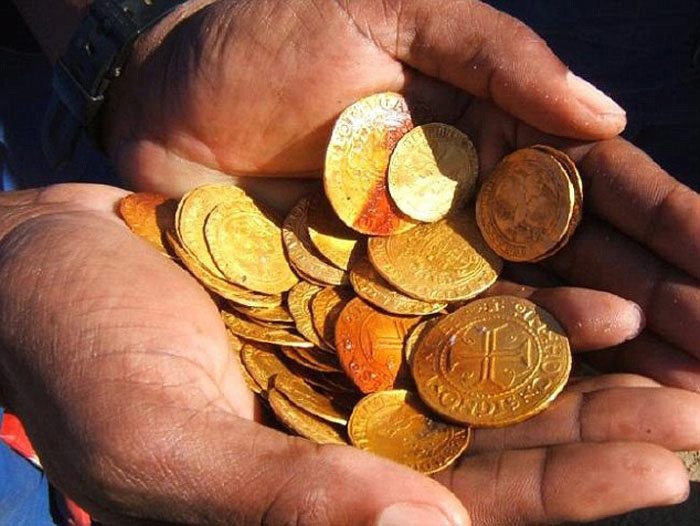 Dozens of gold Spanish coins were among the treasure trove. (Photo courtesy of Dieter Noli)
by Daily Sabah Jun 10, 2016 12:00 am

A group of diamond miners have come across a 500-year old shipwreck containing gold and coins worth of $13 million during their search off the coast of Namibia.

A Portuguese ship, named Bom Jesus, sunk off the Namibian coast while en route to India in 1533.

Miners came across the wood wreckage of the ship in 2008 while searching for diamonds in the Namib Desert.

Without digging further, they miners informed the archeologists, who later discovered that the ship was Bom Jesus, the mysteriously vanished Portuguese ship, and it was loaded with about 2000 bright gold coins in great condition.

The archeologist discovered that the coins were from 1525 to 1538, which was also an aid for them to name the ship.

Dieter Noli, head of Southern Africa Institute of Maritime Archaeology, says that the ship possibly broke after hitting the rocks on the coast of Namibia.

"We figured out the ship came in, it hit a rock and it leaned over," Noli told CNN. "The superstructure started breaking up. The chest with the coins was in the captain's cabin, and it broke free and fell to the bottom of the sea intact. In breaking up, a very heavy part of the side of the ship fell on that chest and bent some of the coins. You can see the force by which the chest was hit, but it also protected the chest."

"Wooden remains would normally have been eaten by organisms," he said and added, "but the poison would have protected part of those materials," during the CNN interview.

The team of archeologists also uncovered more than 5,000 other artifacts and more than 50 elephant tusks.

The Namib Desert is a protected area for diamond mining, which is under control of Belgian diamond company DeBeers in joint with the Namibian government.