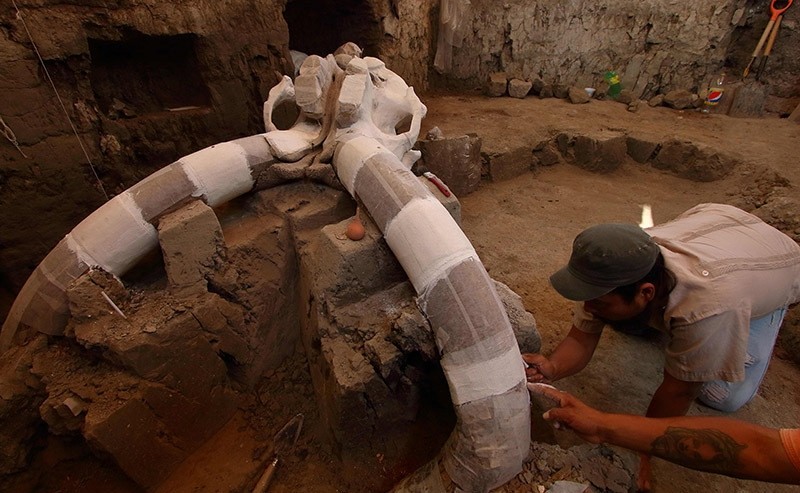 Mexican experts are carefully digging up fossils of a Pleistocene-era mammoth believed to have been cut to pieces by ancient humans.

Remains of the giant wooly mammal, believed to be some 14,000 years old, were discovered by chance in December near Mexico City while drainage pipes were being installed in the village of Tultepec.

Archaeologists have been working at the site since April, and they hope to complete their work in the next few days.

Luis Cordoba, an archaeologist with the National Institute of Anthropology and History, said the remains of more than fifty mammoths have been discovered in the area around the capital, where in pre-historic times there was a shallow saltwater lake where the heavy creatures often got stuck.

The lake was also very good for preserving the remains.

Other mammoth remains have been found in the Tultepec area, "but this is the first time that they can be studied because in general people do not report the finds in time," Cordoba said.

When alive, the mammoth was 3.5 meters high, five meters long, weighed around five tonnes, and was between the ages of 20 and 25.

The Tultepec mammoth, which is about three-quarters complete and well preserved, still has tusks attached to its skull.

However the remaining fossils "do not maintain an anatomical order," Cordoba said, suggesting the mammoth was cut up by humans for its meat or pelt.

Scientists hope to eventually assemble the fossils and put them on display.