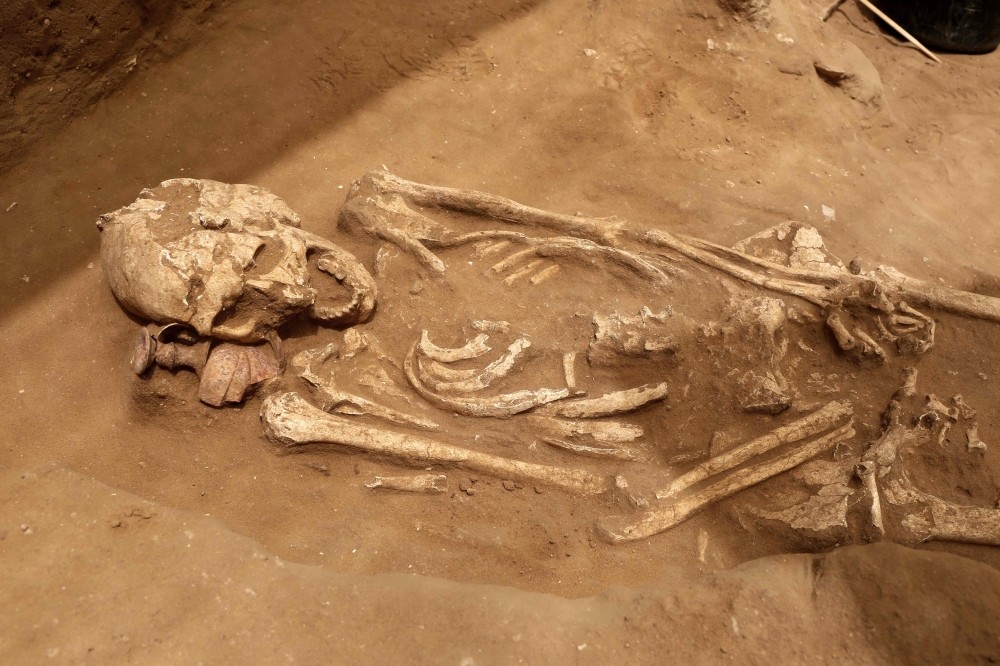 by Jul 12, 2016 12:00 am
With an excavation in southern Israel for the first time unearthing a cemetery of ancient Philistines, the bones of the people of the biblical giant Goliath may finally shed new light on mysteries of their culture. The expedition organizers say the discovery of the cemetery marks the "crowning achievement" of some three decades of excavations in the area.

Some of the site's finds were going on display on Sunday at the Rockefeller Archaeological Museum in Jerusalem.

Almost three millennia since the Philistines were wiped off the face of the earth by Babylonian armies, a U.S. archaeologist was hard at work crouched in one of their funerary chambers at the excavation in the Mediterranean city of Ashkelon.

Brush in hand, he delicately extracted from the sandy soil the complete skeleton of a Philistine buried with a terracotta perfume flask, which was fused to the skull with the passage of time.

"This discovery is a crowning achievement, the opportunity to finally see them face to face," said archaeologist Daniel Master, in charge of the site which has been excavated since 1985 under the Leon Levy Expedition, affiliated with Harvard University's Semitic Museum, among other institutions.

"With these 145 corpses we hope not only to understand their funeral customs, but to collect clues in the bones to understand how they lived, to bring the Philistines to life again," he told Agence France-Presse (AFP). Bone samples taken from the site are currently undergoing DNA, radiocarbon dating and other tests to try to shed fresh light on the origin of the Philistines.

The first graves were discovered in Ashkelon in 2013 on the site of its ancient Philistine port city, which had 13,000 inhabitants at its peak.

Today the area lies in a national park popular with Israeli families from modern Ashkelon who come for a stroll along the seaside lawns and paths.

Who were the Philistines? The origins of this "sea people" - a term also used to describe their Phoenician contemporaries - remains a mystery.

Their red-and-black pottery suggests they may have come from the Mycenaean civilization of the Aegean.

Master said, "What is certain is that they were strangers in the Semitic region," where there is evidence of their presence between 1200 B.C. and around 600 B.C. on a thin coastal strip running from present-day Gaza to Tel Aviv.

Traders and seafarers, they spoke a language of Indo-European origin, did not practice circumcision and ate pigs and dogs, as proven by bones with bite marks in the ruins of the other four Philistine cities: Gaza, Gath, Ashdod and Ekron. Beyond the previously scanty archaeological record, the Philistines are known mostly from the Old Testament account given by their neighbors and bitter enemies, the ancient Israelites.

The book of Samuel describes the capture by Philistine fighters of the Ark of the Covenant and the duel between their giant warrior Goliath felled by a stone from David's sling. From these biblical descriptions of savage marauders emerged the modern usage of "philistine" to mean a person without culture or manners.

A few hundred meters from the dig, at its outdoor laboratory, anthropologist and pathologist Sherry Fox told the story told by the skeletons. "From their teeth, we can see that they did not have an easy life," she said. "We see these lines that indicate a growth interruption as the teeth are forming. There were problems in childhood with either fever or malnutrition."

"We also see from their bones that they were hard workers, they practiced inbreeding and they used their teeth as tools, probably in the weaving industry," she said softly, holding up a skull. She said they were "normal size" with no evidence of any Goliath-sized giants.

Master said that, despite similar-sounding names, there is no connection between the Philistines and today's Palestinians. "The words are similar, but not the people. We know here in Ashkelon that these Philistines were completely destroyed by [Babylonian King] Nebuchadnezzar in December of 604 B.C. Everything that came after was very different and a very different group of people." The 30 years of excavations at the Ashkelon cemetery come to an end this summer, when the dig will be reburied.
RELATED TOPICS