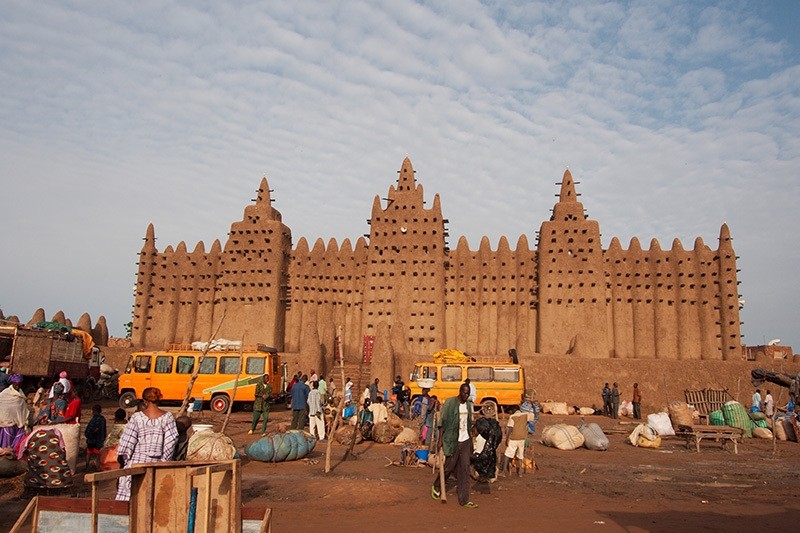 Djenne, which contains some of finest examples of earthen buildings including the world's largest earthen mosque, and Shakhrisyabz, birthplace of Tamerlane that contains unique examples of Timurid architecture, were added to the UNESCO's endangered heritage sites list

The UN's cultural agency on Wednesday added Mali's legendary earthen buildings to its heritage-in-danger list, saying a lack of security was preventing conservation of the site, and also expressed concern over the impact of tourism on monuments in Uzbekistan.

Mali's old towns of Djenne, 570 kilometers (350 miles) northeast of the capital Bamako, have been inhabited since 250 BC and are characterized by the extraordinary use of earth in their architecture.

The houses, roughly 2,000 of which have survived, are built on a small hill to protect them from seasonal flooding.

UNESCO said that the 40th meeting of its World Heritage Committee in Istanbul decided to place the site on its list of world heritage in danger.

"The Committee has expressed concern over the property, which is situated in an area affected by insecurity," UNESCO said in a statement.

"This situation is preventing safeguarding measures from addressing issues that include the deterioration of construction materials in the historic town, urbanization, and the erosion of the archaeological site."

UNESCO did not detail the nature of the security threats but Mali has been threatened for the last four years by terrorist groups such as Al-Qaeda in the Islamic Maghreb (AQIM) and Ansar Dine.

The site was inscribed on UNESCO's World Heritage List of the world's outstanding natural and cultural wonders in 1988.

UNESCO says its list of heritage in danger is designed to inform the world of risks to the very characteristics that led to a site being listed as World Heritage and encouraging corrective action.

In 2012, terrorists destroyed nine mausoleums in the ancient Malian town of Timbuktu, as well its famous Sidi Yahia mosque which dates back to the 15th and 16th centuries.

One of the alleged attackers, Ahmad al-Faqi al-Mahdi, will go on trial at the International Criminal Court in The Hague from August 22, the tribunal announced on June 1.

Including Djenne, Mali now has three sites on the world heritage in danger list. Timbuktu and the Tomb of Askia in Gao were both added in 2012 when the fighting first broke out.

Meanwhile, the committee also added the historic center of the southern Uzbek town of Shakhrisyabz to the in-danger list, "due to the over-development of tourist infrastructure in the site."

The town contains an unrivalled collection of religious and secular monuments built during the empire led by the great Turco-Mongol leader Timur (Tamerlane) in the 15th century.

The committee said the destruction of buildings in the center of the site and the construction of modern facilities such as hotels had "affected irreversible changes to the appearance of historic Shakhrisyabz."

It requested a mission to assess the extent of damage and propose appropriate corrective measures. The site was given world heritage status in 2000.

In a reverse move also announced on Wednesday, the committee decided to remove the complex of churches and holy sites in the Georgian town of Mtskheta from the in-danger list, where it had been listed since 2009.

"The Committee's decision reflects recognition of Georgia's efforts to improve the safeguarding and management of the site," the UNESCO statement said.

Previously, UNESCO had been concerned by the deterioration of its stone fabric and fresco paintings caused by work carried out to its edifices, as well as urban sprawl.