Ani: The city on this side of the river 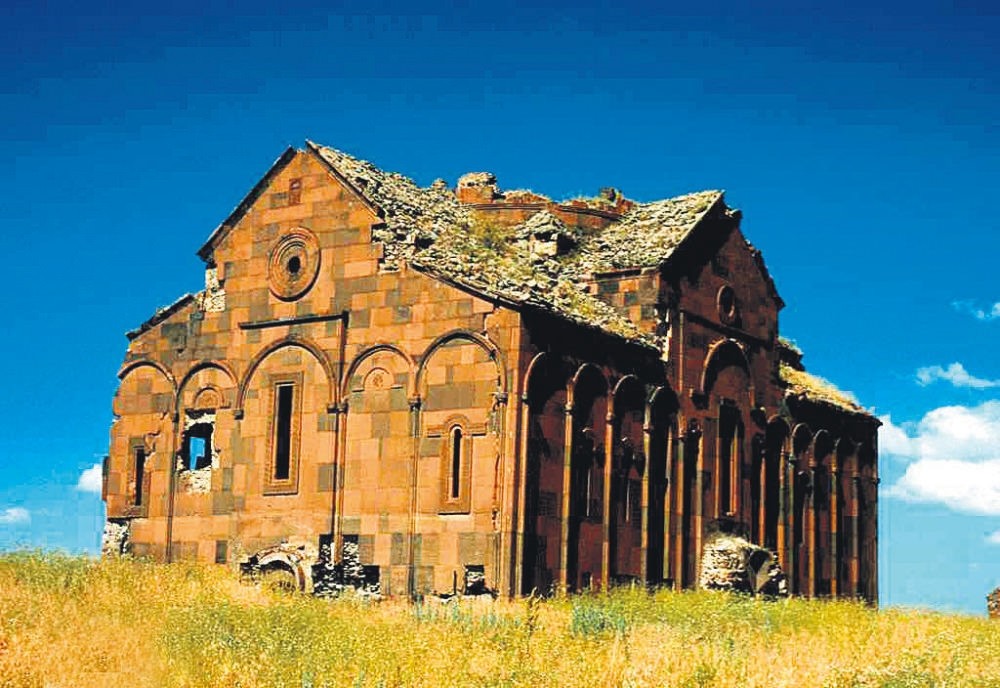 Ani, the medieval town on the Turkish banks of Arpaçay/Ahuryan, has recently been included on UNESCO's World Heritage List. The Armenian stonework, frescoes and its location by a beautiful gorge make the site unique, and it is set to attract many tourists once facilities are improved

Two days before the coup attempt, I received an email from a British friend saying he and a couple of friends were planning a trip to Georgia, that they would cross over to Kars for a few days and asked if I wanted to join them in Ani the second week of August. I was very excited about the idea, said yes, made plans to read up on the ruins and even considered learning the Armenian alphabet so I could have a go at deciphering the inscriptions on the walls still standing. On July 15, I read the news that at the UNESCO Conference being held in Istanbul that week Ani had been included on World Heritage List. That naturally added to the excitement of the visit, but on the evening of the very same day, Turkey was - for want of a better word - besieged and managed to fight back. My immediate priorities changed, and I abandoned the idea of going. ... Only to change my mind a couple of weeks later and book a last minute plane ticket to Kars when the country quickly recovered from a sense of emergency. 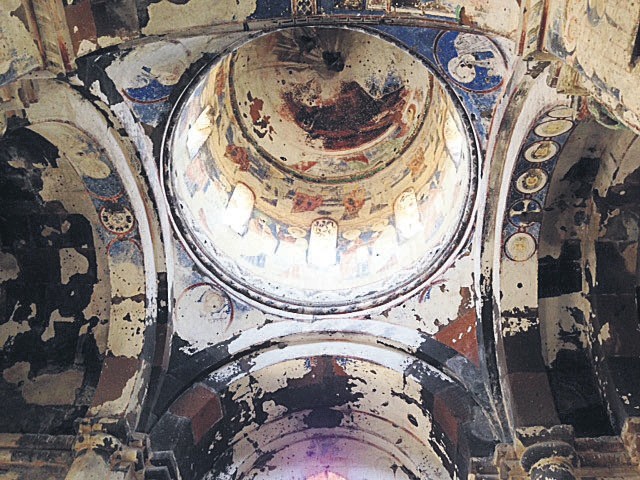 That is to say, I arrived in Kars rather unprepared. I knew that Ani was a much-fabled medieval Armenian city on the banks of the Arpaçay/Ahuryan, right on the border between today's Turkey and Armenia. My British friends were not quite sure if they needed special permits to visit, as had been the case some decades ago. I checked with Turkish friends who had visited recently and learned that permits are no longer needed. The blogs that I consulted said there didn't seem to be proper public transport between the city center and Ani - a facility that I'm hoping will soon be provided now that Ani is on the UNESCO list. I thought we would be better off hiring a taxi for the day.

So that is what we did. The ride to Ani is a beautiful one on the high plateau, providing several encounters with flocks of sheep and herds of cows, as villagers go about their daily business on either side of the road. Then, at the end of the road, right before the gorge, the round and robust battlements of Ani appear, letting you know that it once was a center that ruled the region. As you approach, you see bits and pieces of ancient walls as on the approach to Ephesus, and at the last leg of the road you drive through a very quiet, stony town - almost theatrical in its desolateness, with its roadside shop's faded red Welcome sign. It was just as well that we had heeded the guide's advice and brought food, water and sunscreen with us.

A city on the Silk Road

It was around 11 o'clock when we got out of the taxi, the sun was pretty high in the sky, but still, for an Istanbulite, the air felt fresh compared to the mugginess of the capital. That is of course what Istanbul was in the medieval period when Ani was a thriving city on the Silk Road, such that when, in the 11th century, one of the kings of Ani feared that Constantinople would lay claim to his city, he pre-empted the emperor by making one of the emperor's sons his own heir. At the entrance there is a signboard with the history of the town in both English and Turkish where the several invaders of the town are listed. The town seems to have gained importance in the 9th century, when the Bagratids moved their capital to Ani and the signboard keeps referring to them, without once using the word Armenian. Something, I thought to myself again, that might change after the recent UNESCO decision. The board explains how the town changed hands several times. After the Seljuks and a Kurdish dynasty, it was ruled by Georgians for a while, and then like several other towns in the Middle East, was ravaged by the Mongols. The Georgian history of the east of Turkey, incidentally, turns out to be another discovery of this trip for me, as I learned that there are a scattering of Georgian Churches in the region towards Çoruh and Tortum. 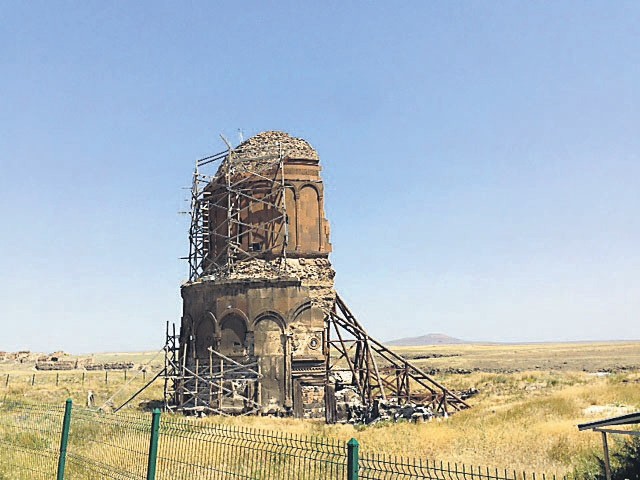 After being impressed by the sturdy walls, the emptiness of Ani is the first thing that strikes you, as you feel those strong battlements must have guarded a more populous and built-up inner city. We first headed for the cathedral, where there seemed to be some restoration work going on, mostly consisting of men putting rubble in wheel barrows. It's an imposing red stone structure, with several reliefs and inscriptions on the façades. We approached the building from different sides to find a path of least resistance that would actually lead us inside, as the ground was uneven with stones and covered in brambles. It'svery imposing indoors and this reminded me that I still hadn't visited the big Armenian Church in Karaköy. The guidebook had warned us that we would find the frescoes defaced, but that had hardly prepared us for the proliferation of graffiti, old and new, in Turkish and in Armenian. Coupled with the profusion of bird droppings that have plastered the stone columns, I think UNESCO will have its hands full when they finally get to do some proper restoration work here.

I took out the alphabet I had managed to scribble in my notebook the night before and tried to make out the names of the Armenian visitors. Particularly when it is in small letters and cursive, Armenian doesn't look unlike Arabic, with all those troughs of "u"s merging into "sin"s. Sure enough, in the next church we entered, we encountered the first tourists - who happened to be Turkish - other than ourselves, and one of the men said to the other, "What is this writing? Arabic I assume," a comment that is a sad reminder of our truncated relations with our neighbors. I thought of correcting him, but then decided it was equally fine that this gentleman should entertain the idea of Christian Arabs who used to live in the region. Not far from the cathedral is the more familiar site of Surb Prkich, which seems to have been waiting for its other half forever. It was out of bounds, with several bits of scaffolding around it. Against the clear blue sky, the forlorn looking stumped dome reminded me of the photograph of the Chisti Sharif in Rory Stewart's Afghanistan travelogue "The Places in Between," making me aware of the connections between the lands of the Silk Road. 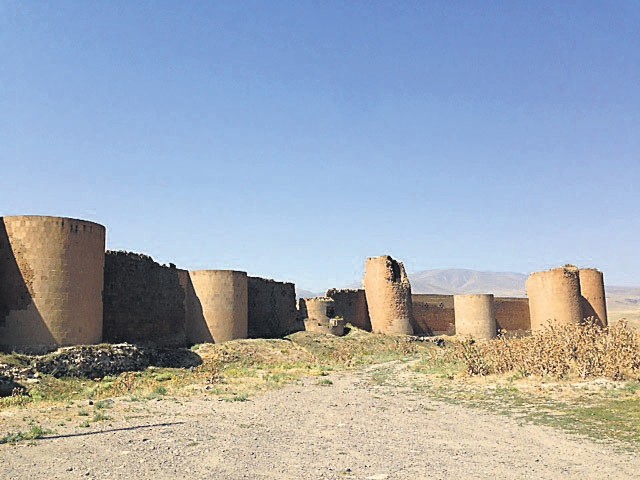 The church St. Gregory of Tigran has the best-preserved frescoes in Ani, and we tried to make sense of the several scenes depicted on the walls. There is Lazarus risen from the dead, there is a Green Man figure, disheveled hair and beard running like a green river, who I assume is a likeness of John the Baptist. As an Istanbulite and knowing that the Byzantines had ruled the town for a while, I looked for Greek inscriptions and managed to find a lone John on one of the arches, as I identified an iota and an omega. The church, like several other structures in Ani, looks like it's perched on a precipice, with wonderful views of the beautiful green river, which looked more than enticing on such a hot day. We contemplated how difficult it would be go down for a dip, whether we'd be able to find a hole in the fence and whether the no man's land on the banks of the Arpaçay might be mined as our guide book warned us. We abandoned the idea and then made towards St. Gregory Abughamrents. This building has no frescoes left, but with its windows opening towards the river, it commands an incredible view. Every other church in Ani seems to be dedicated to St. George, a more or less local saint, who - this I still find puzzling - has ended up being the patron saint of England. On our way back, we stopped at the Church of the Apostles, admired its cupola from the inside, as the architect seemed to have tried several styles and patterns with the black and red stones.

Its remoteness and lack of tourists, the beautiful river that runs at its border and the house martins that do all sorts of tricks in the air (we almost forgive them the damage they've caused to the buildings) makes a stroll through Ani a pretty special experience. As we made our way back to the gates after a good three hours, I imagined myself campaigning as a candidate for mayor of Ani, promising better roads, several water fountains, and small shady squares, confident that all these essential amenities would carry me to victory. I trust some of these will be provided in the near future, and more tourists will start to trickle in. So if you don't want the chatter and clicking of tourist groups to get in the way of historical daydreaming, get your bottle of water and hat and go now!
Last Update: Aug 30, 2016 1:12 am
RELATED TOPICS