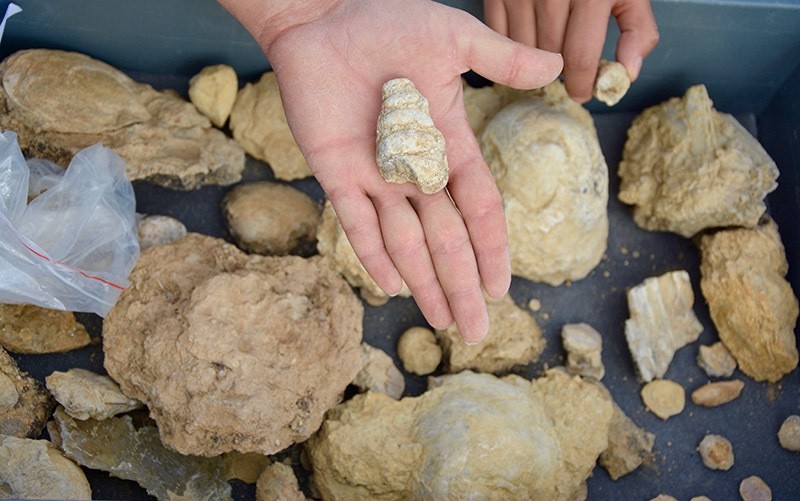 Shelled and non-shelled molluscs, limpets, asterioidae, mussels and echinodermata fossils have been found during excavations in the small village of Karakuyu, located in Mucur district of Kırşehir province in central Turkey.

Assoc. Prof. Dr. Ahmet Cem Erkman, who is the surface exploration team leader and a teaching member at the Ahi Evran University Anthropology department, stated that they are probably remains from the Tethys Sea, dating back to 33 to 55 million years ago.

The new found fossils have caused excitement among scientist since they will provide some enlightenment on Anatolia's natural history.

Upon their discovery, the fossils were officially registered with a report to the Turkish Ministry of Culture and Tourism.

The team compared the fossils to the ones at the Directorate General of Mineral Research and Exploration museum and scanned related literature, but were unable to match them with previous fossils registered in the region in Kırşehir.

Assoc. Prof. Dr. Erkman, who specializes in vertebrates, stated that experts in the area of invertebrates need to do a detailed research on the fossils.

"The fossils are estimated to date back to the Eocene epoch. During our project, we encountered a nummulite layer in 2015. As the place was not registered, we started excavating the fossils."

The findings prove that the district of Kırşehir had a sea at some point in its history.

"Anatolia was located under a shallow sea. This sea dried out over time. We still continue with our research in order to obtain clearer findings. Research carried out in this region will be of paleoecologic, paleogepgraphic and paleoclimatologic importance", added Erkman.