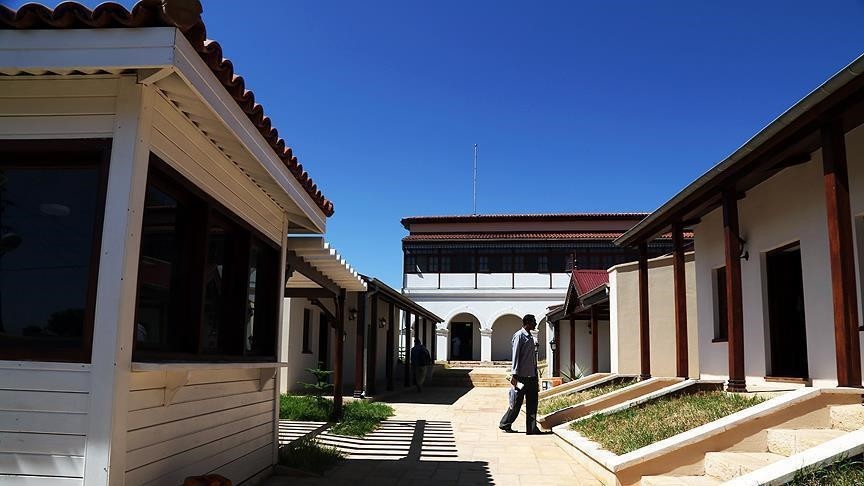 by Anadolu Agency Dec 16, 2016 12:00 am
The Turkish Cooperation and Coordination Agency (TİKA) has restored a 100-year-old Ottoman-era building in the Ethiopian city of Harar.

The consulate building was built during the Ottoman era in 1912; however, the building neared collapse after years of neglect before TIKA began restoring it two years ago.

"We worked to get the original Ottoman architecture back at the forefront," Dr. Hamit Pilehvarian, head of the project, told Anadolu Agency on Tuesday.

Pilehvarian said families lived in Harar in the Ottoman period, and some buildings similar to classical Turkish architecture could still be found in the city.

He said the roofs of some old buildings in the city had special Alaturka tiles that reflected their Ottoman heritage. Pilehvarian said his team also restored hand drawings on the ceilings of the second floor, inspired by the local Harar architecture.

Fazıl Akın Erdoğan, TİKA's Addis Ababa coordinator, said: "We think the restored building will be one of the symbols of the city," adding the building will soon be open to visitors.

The historic city of Harar in eastern Ethiopia is on UNESCO`s World Cultural Heritage list. The wall surrounding the city was built between the 13th and 16th centuries.

The majority of Harar`s population is Muslim. The city has 82 mosques, three of which date back to the 10th century; there are also 102 shrines in the city. Townhouses with their exceptional interior design constitute the most spectacular part of Harar's cultural heritage, according to UNESCO.
Last Update: Dec 16, 2016 2:59 am
RELATED TOPICS