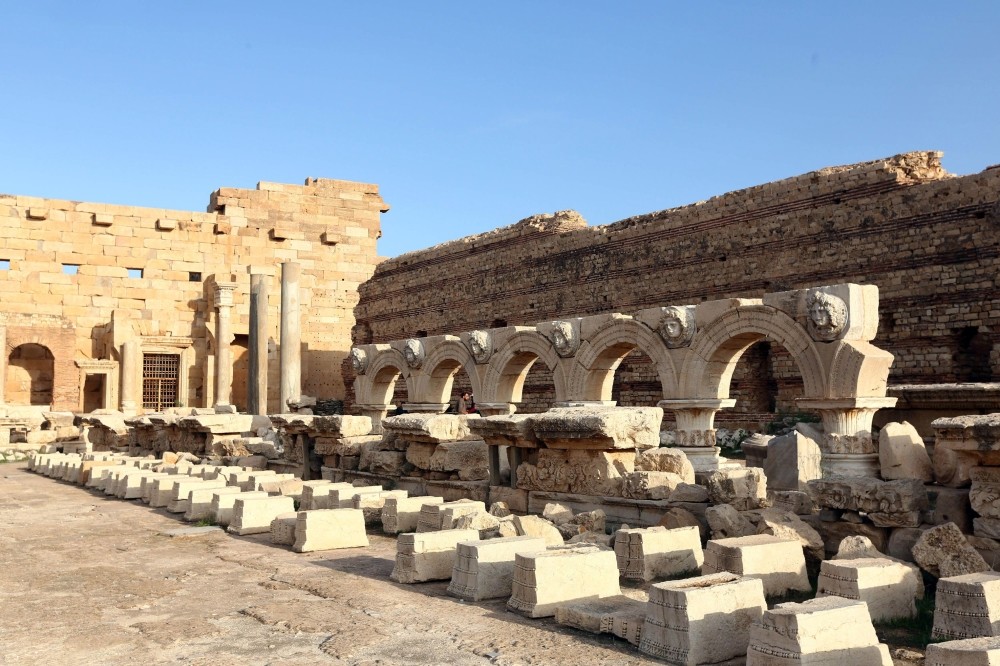 by Dec 24, 2016 12:00 am
Ali Hribish stands by the Arch of Septimius Severus, which dominates Libya's ancient city of Leptis Magna, brandishing letters of thanks for his efforts to protect the site.

The former electricity company employee in his 50s has become the Roman city's unlikely savior, protecting it from looting and vandalism as chaos rocks the country following the 2011 downfall of Moammar Gadhafi.

Despite having no background in archaeology, Hribish gathered a band of fighters who dedicated themselves to preserving the ancient Roman city, a UNESCO World Heritage site.

While others set up armed groups to protect banks and public buildings, "we immediately thought of Leptis Magna," says Ashraf Mohammed, 33, one of the first fighters to join Hribish's group.

"A bank can be rebuilt, but our monuments and our history are things we can't replace," he says.

The group of 20 young men, Kalashnikov assault rifles in hand, go on a routine patrol around the 50 hectare site.

They inspect the hippodrome, the basilica and the open-air theater that used to host some 15,000 spectators on its terraces, with a sublime view of the Mediterranean.

Roman Emperor Septimius Severus, who was born in Leptis Magna and ruled Rome from 193 to 211 AD, favored his home town and turned it into one of the most beautiful cities in the empire.

He endowed it with splendid monuments including a vast basilica over 30 meters high, and renovated the thermal baths built during the reign of Hadrian (76-138 AD). The open-air pool is still intact to this day.

Hribish, from the nearby city of Khoms, fears for the site's safety.

Daesh militants, who destroyed priceless artifacts in Syria and Iraq, are still active in Libya despite having been ousted from Sirte, their North African bastion.

But "we are much more worried about looting and acts of vandalism," Hribish tells AFP, saying he knows "every stone of the site."

Hribish says he was "appalled" when Daesh blew up UNESCO-listed Roman-era temples and looted ancient relics in Syria's Palmyra.

But, he says that unlike the country's other historical sites, "Leptis Magna has been protected from acts of looting and we are continuing to monitor it."

"We will not allow Daesh or anyone else to touch it," he says.

In 2015, his men discovered and defused a bomb weighing several kilograms in a cafe close to the site. But, he doubts it was put there by Daesh militants, in a country where multiple armed groups are struggling for power.

Daesh is not the only threat to the site, he says, pointing out that it was developers who destroyed part of the city of Cyrene, an ancient Greek and Roman city in eastern Libya, in order to build houses there.

"We have prevented acts like that here," he says.

He proudly adds that he has blocked plans to build an unlicensed row of shops immediately next to precious remains.

"At the start, we thought our mission would be a short-term thing. We expected a state would be built that could guarantee that the country's archaeological sites would be protected," he says.

Other inhabitants of the nearby town of Khoms have also mobilized to protect administrative buildings and banks from vandalism and looting.

Hribish says he supports the restoration of Libya's monarchy which was overthrown in the coup that brought Gadhafi to power in 1969.

"We will continue with our mission until a real state is built," Hribish says.

But his colleagues complain they are defending the site with the most basic means.

"There are no surveillance cameras, no fence, not even fire extinguishers," Ali Ghazi, 26, tells the AFP.

Ghazi, who is unemployed, tells of the "nightmare" of putting out grass fires in the summer.

"Some people tried putting them out by beating them with sticks, while others brought in buckets of sea water," he says.

"We have told the Department of Antiquities, but in vain," he says.

"Gadhafi marginalized our history and our heritage for more than 40 years. It's time for us to look after it and show it to the world."
RELATED TOPICS