Over 700 unregistered historical pieces from the Gallipoli war confiscated 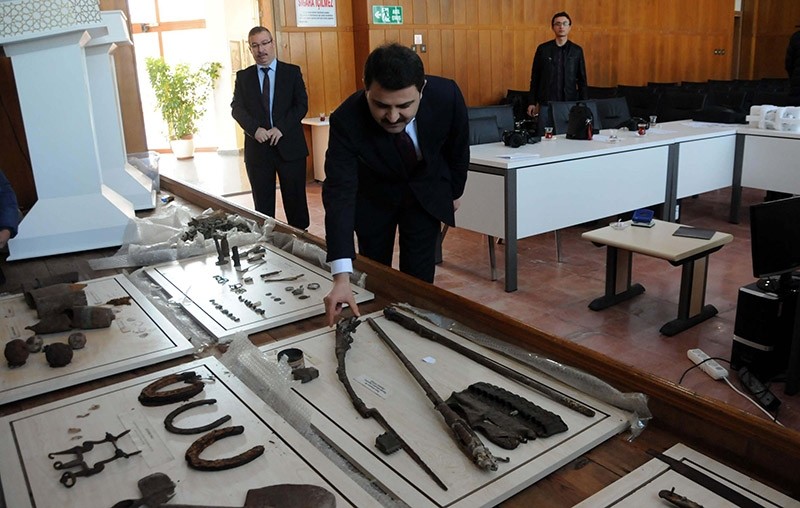 A total of 704 artifacts believed to date back to the Battle of Gallipoli have been returned to the historical Gallipoli peninsula in northwestern Turkey's Çanakkale, after Gendarmerie teams confiscated them in the city of Yalova.

Although the battle took place more than a century ago, interest in historic pieces from the campaign has remained high and unregistered war artifacts continue to be sold to collectors and private museum owners.

Gendarmerie teams were doing their routine control at the ferry dock in Yalava's Çiftlikköy district on February 10 when they discovered and subsequently confiscated the illegally collected pieces dating back to the Battle of Gallipoli. Authorities then handed the artifacts over to the Archeological Site Directorate in Çanakkale for further investigation.

The Archeological Site Directorate announced that all pieces would be displayed as soon as experts finished their detailed examination.

Art historian Yusuf Kartal from the Archeological Site Directorate said that while a great majority of the confiscated pieces belonged to the Gallipoli war, some of the other items dated back to the 16th and 18th centuries.

Cannon balls, swords, bolts, water bottles, bullets and shell casings belonging to the Ottoman, French and English soldiers, in addition to personal belongings including chain watches, razors, and knives are among the historical pieces.

Kartal also emphasized that according to Turkish law, even artifacts that had been officially purchased from the Ministry of Culture and Tourism were only available for personal collections and could not be displayed anywhere.

The Ottoman Empire, which allied with Germany and Austria-Hungary in World War I, faced a major push from Allied forces, who sought control of the Dardanelles. The strait was seen as the gateway to Istanbul, which was then the capital of the Ottoman Empire, as well as a pathway to the Black Sea from the Aegean and Mediterranean Seas.

In February 1915, the British and French navies launched a massive attack on the strait, and the primary assault began on March 18, 1915. When battleships failed to seize the strait, the Allies dispatched troops that landed on the Gallipoli Peninsula in April 1915.

The Allied campaign eventually failed in January 1916, but heavy casualties were sustained on both sides. The Allies' total casualties amounted to 187,000 soldiers, while Ottoman forces lost about 211,000 troops in the battle, according to Turkish sources, though the exact number of casualties is still unknown.