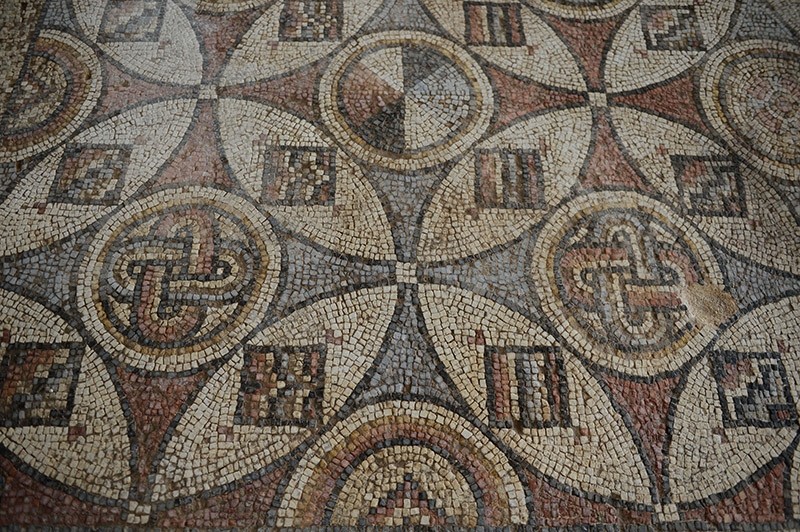 Early Byzantine mosaics unearthed in 1999 in the southern Turkish city of Kilis are ready to be showcased to tourists.

Experts have determined that the mosaics, which were found at the site of a Byzantine basilica, are 1,600 years old.

The mosaics were discovered 18 years ago when security forces determined that illegal excavations were being carried out near the site of Oylum Mound, and reported the situation to archaeologists.

Archaeologists have excavated many of the preserved historical mosaics and sarcophagi and work has begun to make the area a tourist attraction.

The site will be transformed into an open-air museum for foreign and domestic tourists and is slated to open at the beginning of the summer season.

Kilis Governor İsmail Çataklı told Anadolu Agency that the excavation work officially launched in 2004, five years after the illegal excavation was reported at the site.

He explained that tombs were found buried in the cloisters of the basilica, and as the project developed, the site was covered with a steel roof.

"The mosaics are made of geometric figures from local stones belonging to the early Byzantine period about 1,600 years ago. The mosaics were found in very good condition because they were covered and protected from damage," he said.

The inscription from the excavation site is being preserved at the Gaziantep museum and will be exhibited in Kilis once restoration work has finished.

Çataklı added that the open-air museum would be open in June, complete with dining spaces for tourists, and would serve as a place to shed light on Kilis' rich cultural past.

Kilis has been home to various civilizations throughout history and is situated in the northwestern part of the Mesopotamian "Fertile Crescent.
Last Update: Mar 03, 2017 12:10 pm
RELATED TOPICS