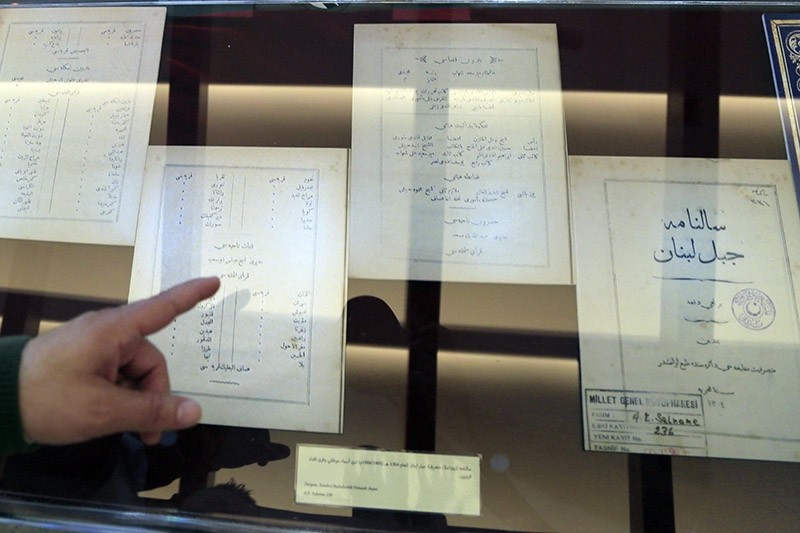 A total of 1,000 historical documents from the Ottoman era are being displayed in an exhibition in northern Lebanon's coastal city of Batroun.

The exhibition is the result of a five-year effort conducted by Turkey and Lebanon, which was under Ottoman control for over 400 years.

Ferd Musa, who works at the Photography Department of the Phoenix Lebanon Research Center, stated that he decided to work with the Ottoman archival material after he learned that Turkey possessed thousands of documents about Batroun's history.

Musa took the necessary steps in establishing a digital library with the cooperation of Turkey, and said that currently some of the documents are being displayed in Arabic.

As the Ottomans recorded everything during their reign in Batroun from 1516 and 1918, the exhibition also includes petitions from Lebanese people, which were filed to the Empire regarding social problems, and mistreatment of animals as well as court records.

The Ottoman Empire was founded at the end of the 13th century in northwestern Anatolia by the Oghuz Turkish tribal leader Osman as a Beylik. Over the years, it transformed into a transcontinental empire beginning in 1354, when the Ottomans crossed into Europe and conquered the Balkans.

During the 16th and 17th centuries, the Ottoman Empire was a multinational, multilingual empire controlling much of Southeast Europe, parts of Central Europe, Western Asia, the Caucasus, North Africa and the Horn of Africa.

The Empire's defeat and the Allied occupation of portions of its territory after World War I led to its partitioning and the loss of its Middle Eastern territories, which were subsequently divided between the United Kingdom and France.