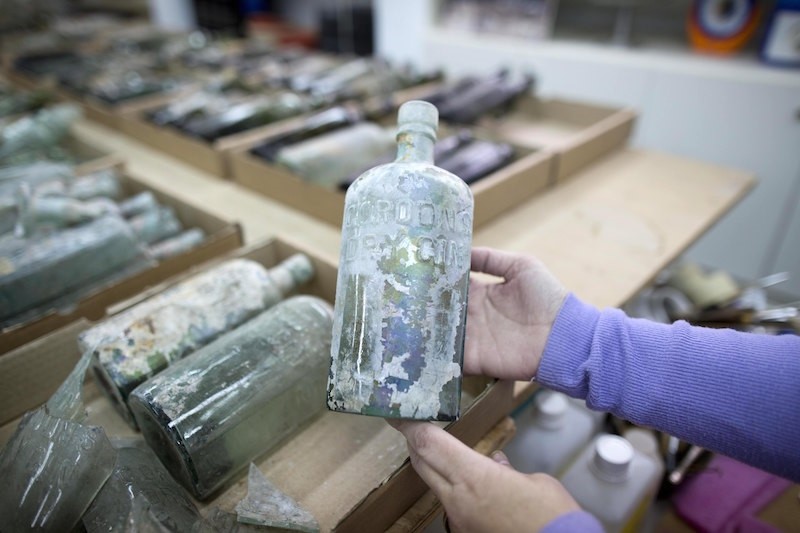 Archaeologists of the Israel Antiquities Authority found hundreds of liquor and soda glass bottles at an excavation site at a building where British soldiers were garrisoned during the First World War near the city of Ramla. (EPA Photo)
by Mar 22, 2017 12:00 am

Archaeologists have unearthed of hundreds of liquor bottles left behind by British soldiers from World War I, the Israel Antiquities Authority said Wednesday.

The foundations of a barracks that had housed British soldiers was found at an excavation site near Ramla, a city in central Israel.

While examining the soldiers' rubbish area, a few meters from the building, archaeologists found that nearly 70 percent of the waste was liquor bottles.

"It seems that the soldiers took advantage of the respite given them to release the tension by frequently drinking alcohol," said Ron Toueg, an excavation director with the authority.

According to Sary Mark, an expert on the British army's occupation of present-day Israel, a group of soldiers under General Edmund Allenby had taken over the area in November 1917 before later occupying Jerusalem.

Most interestingly, said researcher Brigitte Ouahnouna, is that the bottles were brought in from Europe - "a fascinating testimony of the everyday life of the British military camp a century ago." She said it was the first time such a collection had been found in Israel.

The archaeologists, who had been excavating 250,000-year-old flint tools at the site before stumbling upon the bottles, also found dozens of belt buckles, uniform buttons and riding tools in the building.