Born in Tarnow in 1794, national hero Josef Bem had an extraordinary story starting in Poland and ending in the Ottoman territory as a Muslim pasha, where he took shelter after all the battles he had endured

A national hero for Poland and Hungary, Jozef Bem is also an important figure for Turkey who died known as Murat Pasha. His full name was General Jozef Zachariasz Bem, the "Hero of Two Countries" (Poland and Hungary). He was born in Tarnow in 1794. His birthplace had come under the control of the Habsburgs in 1772. Additionally, all of Poland was partitioned between the Austrian Empire, the Russian Empire and Prussia.

During Bem's teenage years, the Duchy of Warsaw was created with the help of Polish Legions serving under French command. Jozef Bem, when he came of age, enrolled to the Warsaw Military School where he studied artillery and engineering.

After graduating, he joined ducal military forces as a 15-year-old trainee. He fought in Napoleon's Grand Army during its march on Russia, launching his military career. After the thrashing defeat of Napoleon, Jozef Bem's destiny changed. The Duchy of Warsaw fell into the hands of the Russian Empire.

At the time, the Russians held large swathes of territory in Poland, as a small vassal whose name was Kingdom of Poland. Jozef Bem served under the Army of the Kingdom for a few years. Consequently, Bem moved to Galicia, the Austrian-occupied territory of Poland where he worked as an engineer. 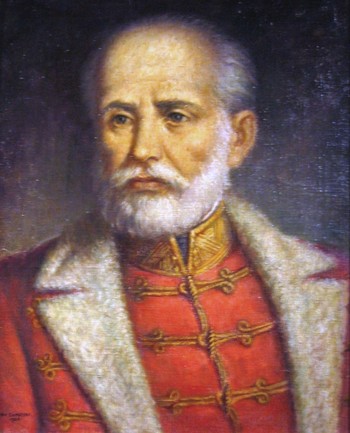 Portrait of Jozef Bem by an anonymous painter

Despite his professional pursuits, he devoted himself to freedom and was eager to take up arms against the occupants. He joined a political group in order to restore Polish independence, which resulted in him being sentenced to one year in prison.

Eventually, he got the chance to make his dreams come true. In 1830, in the night of Nov. 29, the uprising had begun. He immediately joined to insurgents and the students of the Kingdom's Military Academy in Warsaw waged an uprising against Russia. The Polish Army won many of victories. Since Bem had been conducting research on rockets, he commanded the artillery regiments at Iganie in 1831. However, the Polish Army was defeated at Ostroleka.

After the fall of Warsaw, Bem escaped to Paris where he taught mathematics. Then in 1848, he offered his service to Lajos Kossuth in order to fight against the Austrians for Hungarian independence. He achieved significant victories in several battles.

Following this, at the request of the Austrian court, the Russian tzar sent his forces through the Carpathian Mountains. In July and August of 1849, the Hungarians, commanded by General Bem, suffered a series of defeats and on Aug. 14, they were forced to capitulate to the Austrians.

Again wounded, General Bern crossed the border into Ottoman Empire-controlled area, accompanied with other Polish officers who had served alongside him in Hungary. Once again, his life completely changed. While Austria and Russia demanded his extradition, the Ottoman Empire protected him. Still, the Ottoman Empire suffered diplomatic hardships. Extradition did not apply to individuals who converted to the Muslim faith and assumed Turkish citizenship.

Several dozen Polish officers took this step, along with General Bem, who adopted the Turkish name Murat Pasha, "Pasha" being the highest title of military officers in the Ottoman Empire stationed in Aleppo. He served as the governor of the city of Aleppo in what is now Syria.

In his final act of bravery, Bem helped save Aleppo's Christian population from being massacred, risking his life and ultimately dying of malaria on Dec. 10, 1850. His remains were transferred to his birthplace of Tarnow in 1929.
RELATED TOPICS