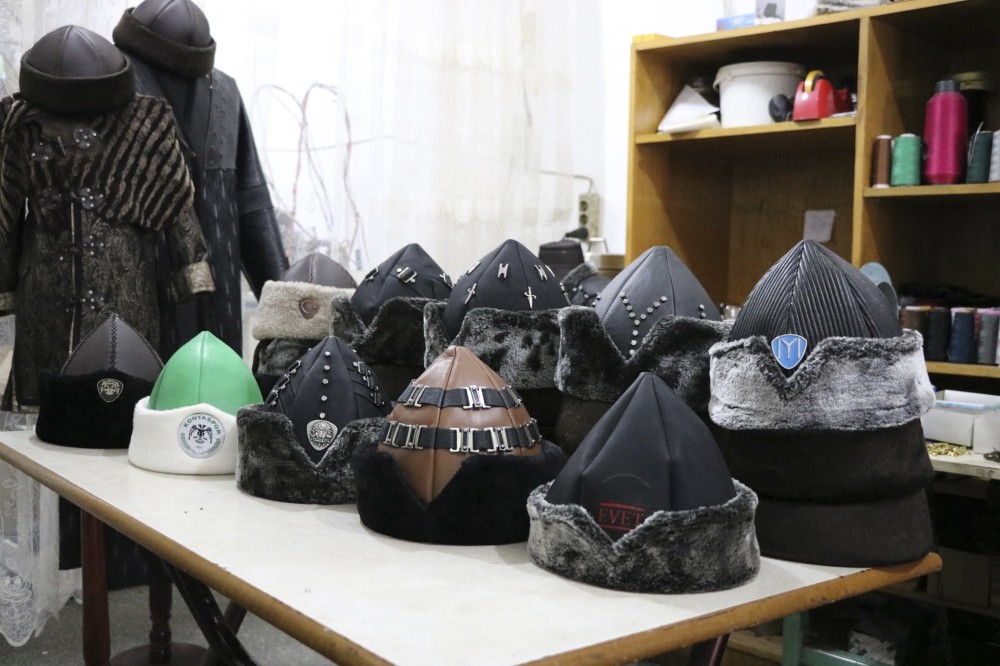 by Anadolu Agency Apr 07, 2017 12:00 am
Mehmet Dilekçi from the province of Konya sells a type of traditional Turkish cap (börk) to many European countries, which he makes himself with inspiration from the famous Turkish TV series "Diriliş Ertuğrul."

Dilekçi, who set up his business with his friend Seyit Kara two years ago, appeals to people from all strata with nearly 80 different styles of börk.

Producing 10 börks per day on average, Dilekçi does not increase the production rate in order to maintain the high quality. The börks, which are designed and produced by Dilekçi, have been attracting great attention from people of politics and art. Following the rising racist sentiment in Europe recently, especially Turkish people in Europe have been ordering börks in large quantities.

Speaking to Anadolu Agency, Dilekçi said they decided to make börks after they watched the fourth episode of Diriliş Ertuğrul.

He said that as Diriliş Ertuğrul gained more popularity, these traditional caps started to get more attention.

"Our aim is to bring traditional clothes of the Anatolian Seljuk and Ottoman Empire to the present day. When we first started our business, many found it strange. However, this perception changed in a short time and we started to focus on other types of clothes as well. Based on suggestions from different people around us, we improved our skills and added variety. For instance, after some advice, we started to make licensed products for Atiker Konyaspor football team," Dilekçi said.

Dilekçi also added that their traditional products reach many European countries as well.

"We receive orders from all over Turkey, but we also sell them to European countries, especially to Germany, France, the Netherlands and Austria. Due to the rising racism in Europe, Turkish people living in those countries want to reflect their own cultures and wear the caps on the streets. Our products appeal to all strata of the population. We have clothes for two-year-olds, as well as for 80-year-olds. However, most of the demand comes from the young people," Dilekçi said.

He also added that they sometimes offer their special products to artists and politicians as a gift. "Börk is our national headgear. We have an approaching referendum in Turkey, which is a matter of our national concern. Thus, we made special börks with "evet [yes]" sign on them. There is a growing interest for these products," he said.

"There are many people coming from different parts of Turkey who come here to visit us and appreciate our work. There are also some people who reach us through social media. It is quite motivating to see those people appreciating what we are doing," Dilekçi said.
RELATED TOPICS