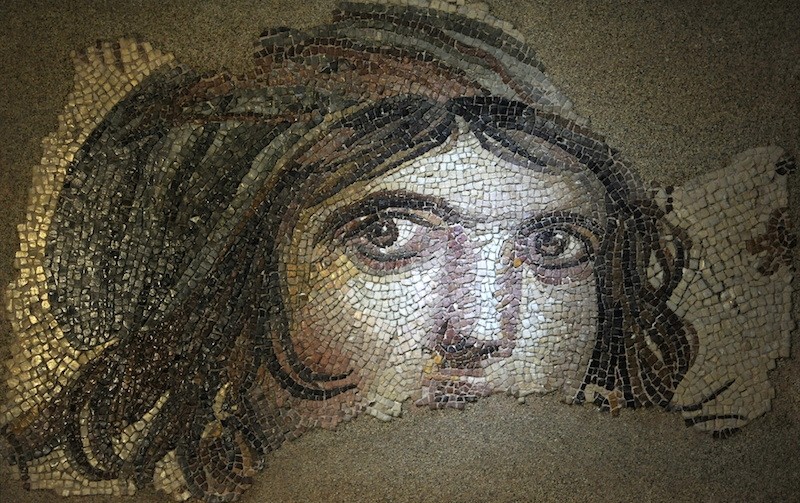 Since the day the famous "Gipsy Girl" mosaic was found in the ancient city of Zeugma, attempts have been made to find the missing pieces of the work, which has become a symbol of southeastern Turkey's Gaziantep.

The mosaic is among the most famous pieces of work on display at the 30,000 square meter Zeugma Mosaic Museum, which has attracted visitors from around the world since it opened in 2011. The Gypsy Girl's disheveled hair, prominent cheekbones and haunting eyes have become somewhat of the face of Gaziantep since it was unearthed in the ancient city.

The Gaziantep Metropolitan Municipality has attempted to make this important work whole again, as there are many missing pieces, which have been stolen and sold by smugglers. The pieces are currently on display in the U.S. at the Wolfe Arts Center of Ohio Bowling Green State University.

Through their work, the municipality aims to reclaim the missing parts of the mosaic and thus contribute to the tourism of the city.

Gaziantep Mayor, Fatma Şahin, explained that the Zeugma Mosaic Museum is the world's most formidable museum in its field.

"The university told me that they would be able to help to speed up the process," Şahin said.

"Also they have to send these pieces to us according to international law. On one hand, we're dealing with the legal dimension whereas on the other hand there's the issue of mutual dialogue," she continued.

"Demet Sabanci and his team have been in contact with the university via the ONE Association. They have begun lobby research regarding the pieces being brought back to Turkey. We have also started work according to international law from ministry to ministry and local to local," Şahin added.

The ancient city of Zeugma was founded in present day Gaziantep by one of Alexander the Great's generals in 300 BC and was conquered by the Roman Empire in 64 AD. It is known for its wealth of ancient Greek mosaics, frescoes, and artifacts.