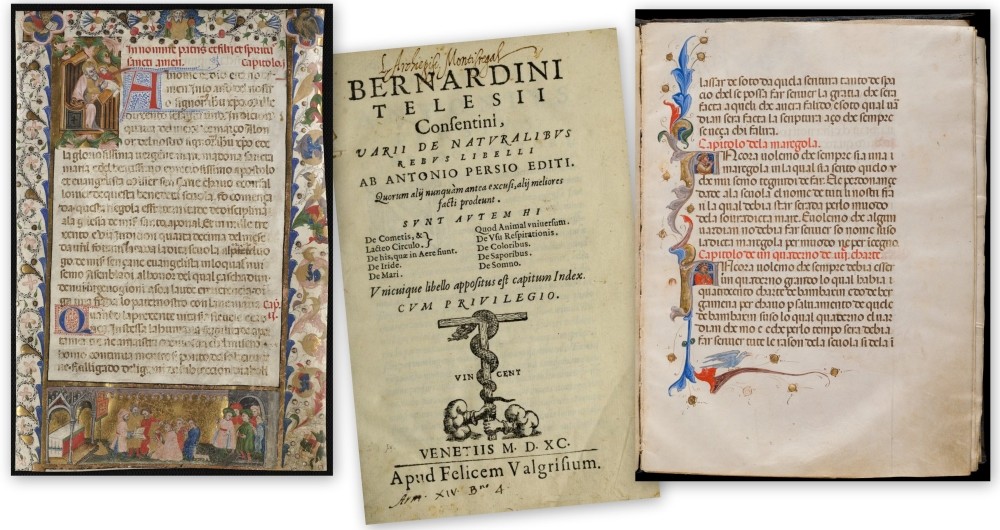 by Associated Press Apr 21, 2017 12:00 am
The Boston Public Library is returning to Italy medieval manuscripts and a volume of works, ending in one case a mystery dating back seven decades.

The items include a manuscript from 1392, an illuminated leaf from a manuscript dating between 1418 and 1422, and a collection of works by Bernardino Telesio, published in 1590.

"Boston Public Library purchased these rare and important materials in good faith for the public to see and study and we took our stewardship of them seriously during the many years that they were in our care," said Beth Prindle, the library's head of Special Collections. "We are fully committed to their safe return."

True ownership of one of the items - the Mariegola della Scuola di Santa Maria della Misericordia manuscript dating to 1392 - emerged as the library was preparing its medieval manuscripts for digitization.

The library bought the item in 1960 from a New York dealer.

In 1879, the manuscript was put on permanent display. When it was taken off exhibition in the late 1940s, it disappeared under unknown circumstances.

The Boston Public Library said new research conducted as it was preparing the manuscript for electronic cataloguing helped track down its history.

The two other items were an illuminated leaf from the manuscript Mariegola della Scuola Grande di San Giovanni Evangelista, dating from sometime between 1418 and 1422; and Varii de natvralibvs rebvs libelli by Bernardino Telesio, published in 1590.

The Telesio item is a printed collection of works by the Italian philosopher and natural scientist. It bears the signature of Cardinal Ludovico II De Torres, who served as Archbishop of Monreale, Italy, in the 1600s and donated his book collection.

The Boston Public Library, which bought the book in 1980 from a Los Angeles dealer, had recently digitized it and made it available through the Internet Archive, an online nonprofit library.

The curator at the Ludovico II De Torres Library recognized the cardinal's signature while looking at the book online.

Boston Public Library and the city of Boston worked with the U.S. Attorney's office and Homeland Security to contact and return the items to the State Archives of Venice and The Library of Ludovico II De Torres in Monreale.
Last Update: Apr 21, 2017 1:54 am
RELATED TOPICS