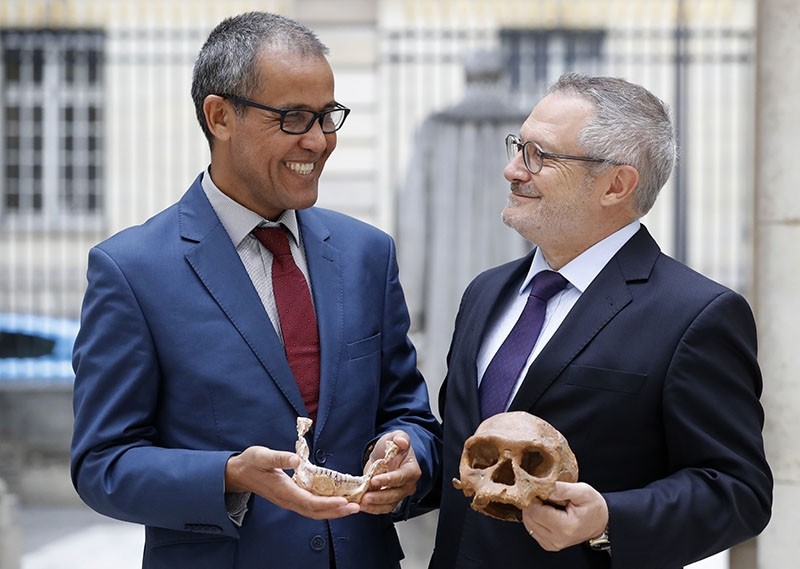 French paleoanthropologist Jean-Jacques Hublin (R) and Abdelouahed Ben-Ncer of the National Institute of Archaeology and Heritage Sciences in Morocco pose with the casting of a skull of Homo Sapiens discovered in Morocco (AFP Photo)
by Associated Press Jun 07, 2017 12:00 am

How long has our species been around? New fossils from Morocco push the evidence back by about 100,000 years.

The bones, about 300,000 years old, were unearthed thousands of miles from the previous record-holder, found in fossil-rich eastern Africa. The new discovery reveals people from an early stage of our species' evolution, with a mix of modern and more primitive traits.

"They are not just like us," said Jean-Jacques Hublin, one of the scientists reporting the find. But they had "basically the face you could meet on the train in New York."

Coupled with other evidence, the Moroccan fossils suggest that Homo sapiens may have reached its modern-day form in more than one place within Africa, said Hublin, of the Max Planck Institute for Evolutionary Anthropology in Leipzig, Germany, and the College of France in Paris.

Previously, the oldest known fossils clearly from Homo sapiens were from Ethiopia, at about 195,000 years old.

It's not clear just when or where Homo sapiens came on the scene in Africa. Hublin said he thinks an earlier stage of development preceded the one revealed by his team's discovery.

We evolved from predecessors who had differently shaped skulls and often heavier builds, but were otherwise much more like us than, say, the ape-men that came before them. Our species lived at the same time as some related ones, like Neanderthals, but only we survive.

Hublin and others described the new findings in two papers released Wednesday by the journal Nature . The discovery could help illuminate how our species evolved, Chris Stringer and Julia Galway-Witham of the Natural History Museum in London wrote in a Nature commentary.

The Moroccan specimens were found between 2007 and 2011 and include a skull, a jaw and teeth, along with stone tools. Combined with other bones that were found there decades ago but not correctly dated, the fossil collection represents at least five people, including young adults, an adolescent and a child of around 8 years old. Analysis shows their brain shape was more elongated than what people have today.

When these ancient people lived, the site in Morocco was a cave that might have served as a hunting camp, where people butchered and ate gazelles and other prey. They used fire and their tools were made of flint from about 25 miles (40 kilometers) away.

So where did the fully modern human body develop? The researchers say evidence suggests primitive forms of Homo sapiens had already widely spread throughout Africa by around 300,000 years ago. The different populations may have exchanged beneficial genetic mutations and behaviors, gradually nudging each other toward a more modern form of the species, Hublin said. In this way, he said in an interview, modern Homo sapiens may have arisen in more than one place.

So if there's a Garden of Eden, he said, it's the continent as a whole.

Some experts who didn't participate in the research called that idea possible, although not yet demonstrated. But John Shea, an anthropologist at Stony Brook University in New York, said it's more useful to think of the different local populations as a single one, connected the same way a big city is connected by subway stops.

"These are parts of a network," through which ideas and genes flowed, he said.

Shea said it made sense to find such old traces of early Homo sapiens in northwestern Africa. He agreed that it doesn't mean our species first appeared there.

Richard Potts of the Smithsonian Institution's National Museum of Natural History said the Morocco fossils "appear to reflect the very early transition to Homo sapiens, very possibly denoting the outset of the lineage to which all people belong."

The site is about 34 miles (55 kilometers) southeast of the coastal city of Safi, northwest of Marrakech. Its age was determined chiefly by analyzing bits of flint found there, and the authors concluded they were around 315,000 years old. Hublin said that since a different method suggested a younger age for the site, he considers the bones to be about 300,000 years old.

Richard Roberts of the University of Woollongong in Australia, an expert in determining ages of ancient sites, supported that conclusion.

"I'd say the authors have presented pretty convincing evidence for the presence of early modern humans at this site by 300,000 years ago and perhaps a little earlier," Roberts wrote in an email.