Cradle of civilizations pictured from above 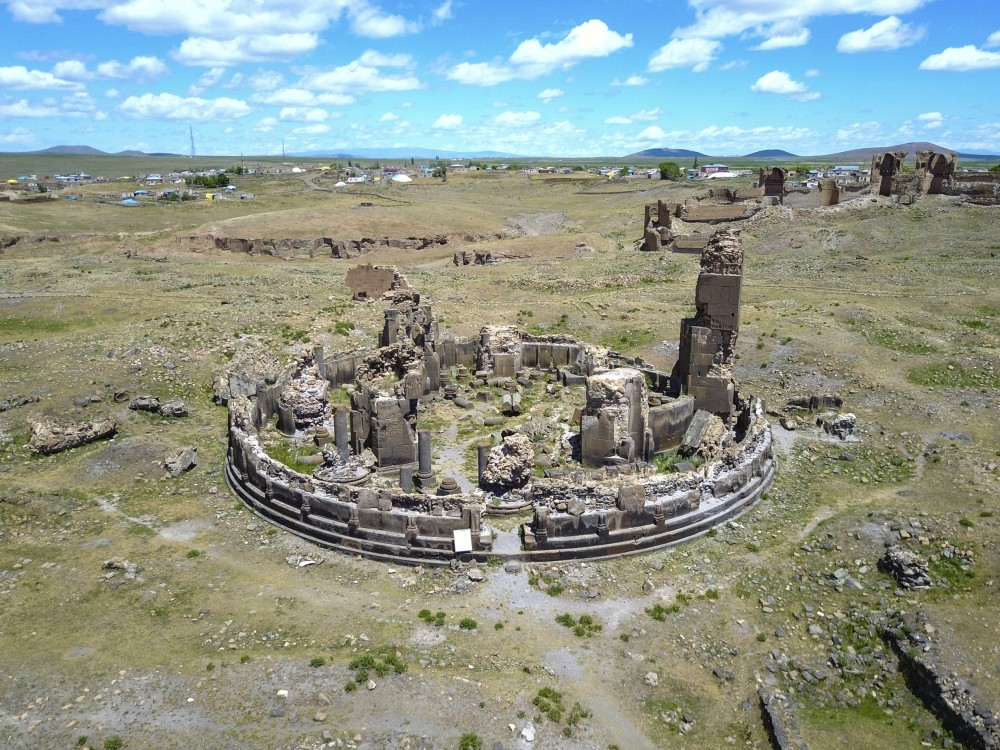 Having been home to many civilizations, the Ani archaeological site in Kars province, with historical buildings belonging to Christian Armenians and Muslim Turks, has been captured from above

Included in UNESCO's World Heritage List, Kars has been photographed from above by Anadolu Agency (AA) via a drone. The city, which is named the "World's City," "the Cradle of Civilization," "One Thousand Churches," and the "City with 40 Doors," has the first Turkish mosque on Anatolian soil at the Ani archaeological site, "Ebul Menucehr Mosque," as well as the "Amenaprgich Church," "Ani," "Ani Cathedral," "Dikrant Honentz Church" and "Abugamir Pahlavuni Church."

The Ani archaeological site near Arpaçay Valley located 48 kilometers (30 miles) from Kars city center was the Armenian capital during the reign of Pakraduni Heraldry between 961-1045 A.D. It has Islamic architectural buildings dating back to the 11th and 12th centuries, was included on the Temporary World Heritage List of UNESCO in 2012 and was registered as a world heritage site in 2016.

Countless civilizations including Saka Turks, Sassanids, the Bagratlı Kingdom, the Byzantines, the Şeddat Oğulları Chiefdom, Anı Georgian Atabegs, the Harzemşah State, İlhanlıs, Seljukians, Karakoyunlus, Akkoyunlus, the Ottoman Empire and Russians have resided in the city that dates back to the 3rd century B.C. The 21 remaining historical structures in Ani mesmerize both local and foreign tourists.

Ani was the first entry point for Caucasians into Anatolia and the pictures from above of these structures belonging to different generations is a sight to see.

The walls and sanctuaries still standing in this city of tolerance shed light on past civilizations. The site of "One Thousand Churches," and "the City with 40 Doors" has the first Turkish mosque on Anatolian soil called "Ebul Menucehr Mosque," as well as other notable structures such as the "Amenaprgich Church," "Ani," "Ani Cathedral," "Dikrant Honentz Church" and "Abugamir Pahlavuni Church," which are all cultural heritage sites.

The medieval city of Ani, built over a 68-hectare area in a tectonic region and protected by a 4.5-kilometer-long fortification system, welcomes guests throughout the seasons. The Ebul Menucehr Mosque, which is the first Turkish mosque in Anatolia, was built in 1064 A.D. and completed eight years later in 1072 and is a center of attraction for visitors.

Located on the historic Silk Road, the Ani archaeological site illuminates the remains of ancient times.

Stefan Lindner, an Austrian tourist who visited the Ani archaeological site, told an AA correspondent that it was his first time in the area and he greatly enjoyed his visit.

Lindner explained that he has visited some of the regions in Turkey and that there are a number of unique and matchless places to be seen. "The historical texture here is incredible and nature is very beautiful. We're delighted to see this archaeological site. Now I want to discover everything about it," Lindner said.

Tourist Marten Stegfellner stated that he was very impressed when he saw the historical buildings and he said, "I come from Austria where there are high mountains. There are skiing areas nearby and it is a region with history, but I was incredibly impressed when I saw this here. I was really delighted. I hope that Ani is restored by the authorities. This place doesn't just belong to Turkey, but is a historical site that belongs to the whole world. I think it is very important to protect and to keep it as it is."

Hilal Topaktaş, a student at Kafkas University (KAU) Medical School, said, "I came to Ani for the first time. There are really beautiful buildings. Ani is a place where many civilizations have made their home and everyone should come and see it.