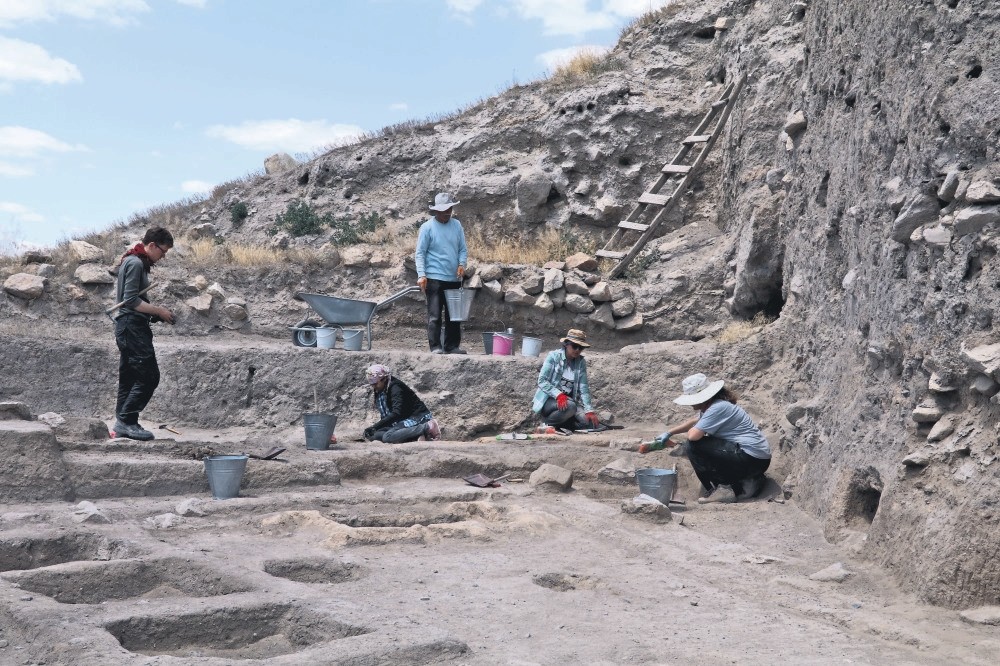 Under excavation since 1993, Çatal Höyük, an ancient 5,000-year-old settlement in central Turkey, will be worked 50 more years by archaeologists

Excavations continue at Çadır Höyük, which bears the traces of some seven to eight civilizations, in the village of Peyniryemez. The findings uncovered by a team led by University of New Hampshire Professor Gregory McMahon are on exhibit at the Yozgat Museum.

Chalcolithic pottery, pottery production workshops and ancient baking quarries were found at the bottom of the mound during excavation works.

McMahon said that they have been working on Çadır Höyük for 24 years, noting: "First, we conducted a survey analysis and then started excavations in 1994. We employ a 30-person excavation team and 30 workers every year. We are digging at several sites. The Chalcolithic findings, dating back to between 3,500 B.C. and 3,600 B.C., are at the bottom, whereas findings belonging to the 11th century A.D. are on the top."

Explaining that they do not know the official names of the Chalcolithic civilizations as they existed before records were ever taken, McMahon said: "There are the traces of the Early Bronze Age and the Middle Bronze Age here. The practice of writing reached Anatolia during the Middle Bronze Age, but we have not found any traces of it. The Hittites lived in the Early Bronze Age while the Phrygians, and perhaps the Persians, lived in the Iron Age, followed by the Romans in the Hellenistic Age, Byzantines and Turks who lived after them."

McMahon added that the excavations could last up to 50 years or more.

Emrah Dinç, who is working on the excavation of the mound, explained that they start excavation around 6:00 a.m. at the latest.

Dinç said that when they come to the mound, they complete the unfinished work of the previous day and then start digging. "When the findings are unearthed, we record and label them. When we encounter architectural ruins or other findings, we start working more delicately. We shave the soil with a trowel, open it with a brush, look around, clean it delicately and uncover what is there," he said.

Çanakkale Onsekiz Mart University's Nevra Arslan, who has been working on excavations for four years, said that she works on the section of the mound from the Byzantine period.

'We have to do fine work'

Arslan remarked that they are working in a room that bears the traces of soldiers of the Byzantine era, adding: "We have to do delicate work, as we work on defense, fire and even artifacts from ancient wars. We can find the traces of wars through delicate excavation work. Only in this way can we discover the traces of fire or footprints. There are metal parts dating back to the Byzantine era. These pieces include items such as helmets and epaulets used by soldiers and animal bones as well as a large number of pieces of baked pottery."

Middle East Technical University archaeologist Burcu Yıldırım, who works on the Chalcolithic part of the mound, said: "We are currently excavating the pottery production center. There are stores and a production workshop, including a large hearth surrounded by walls on four sides. We can say that these were the Nevşehir and Avanos of the era."