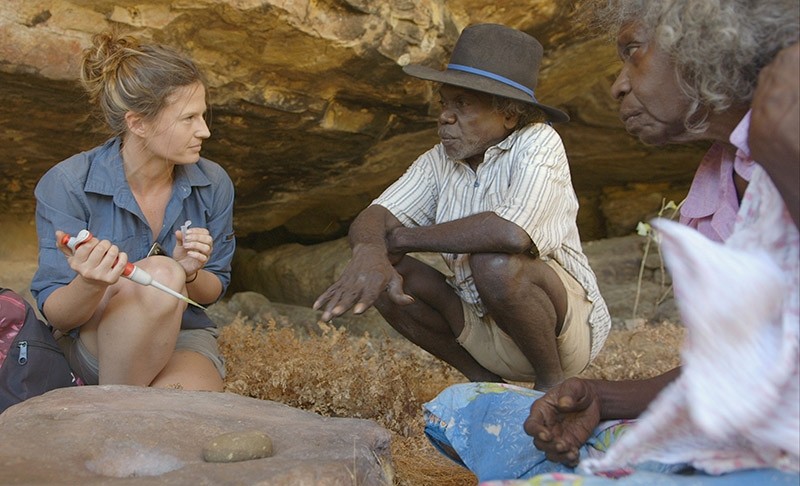 Researcher Elspeth Hayes talking with Mark Djandjomerr and traditional owner May Nango as she extracts samples at cave near Madjedbebe site in Kakadu region, Australia, July 14, 2017. (Vincent Lamberti-Gundjeihmi Aboriginal Corporation via Reuters)
by Compiled from Wire Services Jul 20, 2017 12:00 am

Aboriginal people have been in Australia for at least 65,000 years, longer than previously thought, roaming the area alongside giant megafauna, scientists said Thursday in a finding that sheds fresh light on when modern humans left Africa.

Australian Aborigines are believed to be custodians of the oldest continuous culture on the planet, but when they first arrived has been a contested issue. Previous estimates have ranged from 47,000 to 60,000 years ago.

The finding is based on a treasure trove of thousands of Aboriginal artefacts unearthed in the Northern Territory rock shelter called Madjedbebe, surrounded by World Heritage-listed Kakadu National Park.

The study in the journal Nature said people arrived on the Australian continent before the extinction of megafaunas such as giant wombats and short-faced kangaroos.

New evidence uncovered by a team of archaeologists and dating specialists during a dig there, including the oldest ground-edge stone axe technology in the world, has pushed back their presence even further.

The findings set a new minimum age for the dispersal of modern humans out of Africa and across south Asia.

"It's hugely significant in tying down what happened," the University of Queensland's Chris Clarkson, the lead author who led the team that excavated the site, most recently in 2015, said.

"It means that we can set the minimum age for modern humans coming out of Africa, which until now has been a bit tenuous. We can now say with certainty that they arrived in Australia 65,000 years ago," which is 20,000 years before we first arrived in Europe.

It also indicates that they arrived on the continent before the extinction of Australian megafauna such as giant wombats, kangaroos and lizards.

In addition to showing the deep antiquity of Aboriginal occupation, the dig also revealed evidence of activities and complex lifestyle, including flaked stone tools and grinding stones.

"The site contains the oldest ground-edge stone axe technology in the world, the oldest-known seed-grinding tools in Australia and evidence of finely made stone points which may have served as spear tips," said Clarkson.

"Most striking of all in a region known for its spectacular rock art are the huge quantities of ground ochre and evidence of ochre processing found at the site, from the older layer continuing through to the present."

It was clear the population was "technologically sophisticated."

Some 11,000 artefacts were discovered in the lowest layer from the 2015 dig, with the team carefully assessing the position of each one to ensure they matched the ages of the sediments in which they were found.

Extensive dating by optically stimulated luminescence methods -- which estimates the time since mineral grains were last exposed to sunlight -- showed a general pattern of increasing age with depth, and provided a timeframe that the scientists said was far more accurate than before.

The new dates for Madjedbebe fit well with genetic analyses indicating modern humans left Africa between 60,000 and 80,000 years ago.

At that time, there were much lower sea levels and the crossing distance from the islands of Southeast Asia to Australia was shorter than today.

"This would have been the first major water crossing ever by humanity," Clarkson said.

The Mirarr clan, traditional owners of large parts of Kakadu and western Arnhem Land, have now closed access to Madjedbebe, but applications have been made by archaeologists to examine other sites in the area to see if they have the same sequences.

"This study confirms the sophistication of the Australian Aboriginal toolkit and underscores the universal importance of the Jabiluka area," said Justin O'Brien, chief executive of the Gundjeihmi Aboriginal Corporation, which works to advance the interests of the Mirarr.

"These findings reinforce the need for the highest level of conservation and protection for this site."