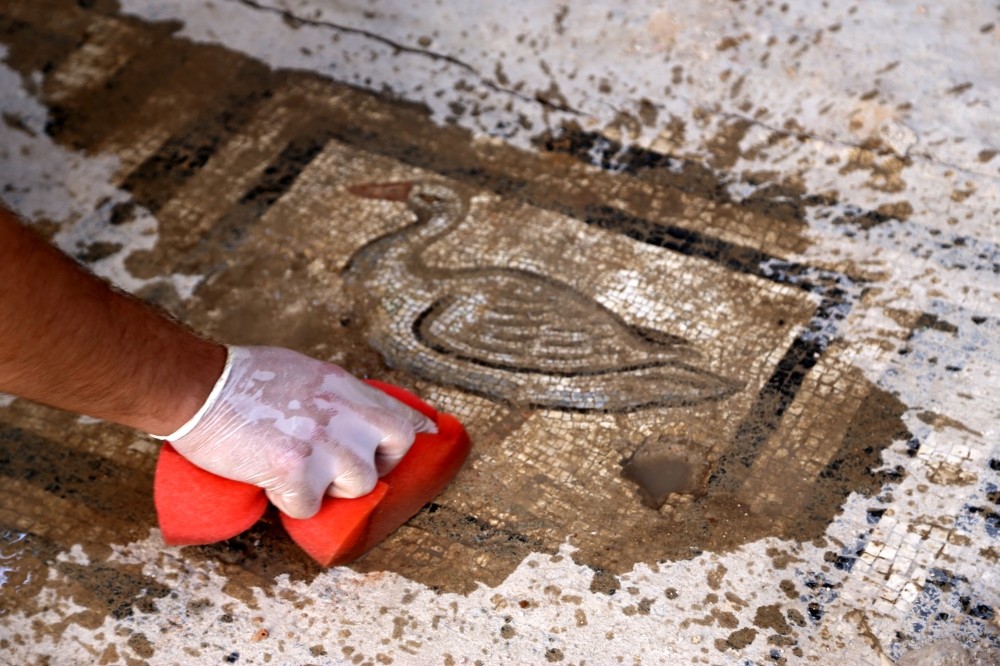 The head of excavations being conducted in the ancient city of Perge in Antalya province, Antalya Museum Director Mustafa Demirel, has announced that a new mosaic has been found in the ancient city. The 1,800-year-old mosaic depicts the sacrifice of Iphigenia, the daughter of King Agamemnon in Greek mythology, during the Trojan War.

Speaking to Anadolu Agency (AA) Demirel said that during the initial years of the excavations, important projects were conducted in terms of rehabilitative efforts at the site.

In the context of the excavation project, the area which includes the Kesos Fountain in the north to the south was rearranged and excavations along the West Street were accelerated. Throughout the archaeological excavations, numerous sculptures and artifacts have been unearthed, and Demirel noted that a particular mosaic has been unearthed to the "excitement" of researchers.

"During the ongoing excavations in Perge, a mosaic was discovered which depicts the scene of the sacrifice of Iphigenia during the Trojan War. We made the finding while conducting excavations of a shop located on the ancient city's West Street. We discovered the spot and identified it as a "holy cult area." After extensive research conducted by laboratory experts, the mosaic was unearthed in the basement of the shop. This is our first discovery of such magnitude, as we have never before discovered a mosaic like this one. It is 1,800 years old," Demirel noted.

Mustafa Demirel provided information about the era in which the mosaic was likely created, saying: "The famous Trojan War began with the abduction of Helen, the wife of the Spartan King Menelaus, by the Trojan King Priam's son Paris in 1,184 B.C. While a fleet of Menelaus' pioneering ships and King Agamemnon of Mycenae were preparing to break sail, the winds suddenly stopped. The oracle attributes it to the anger of Artemis and indicates that Agamemnon is likely to have committed an offense by killing an animal, which was consecrated to Artemis. The anger of Artemis could only be lessened with Agamemnon's sacrifice of his daughter, Iphigenia, for him. Thus, Agamemnon plans to sacrifice Iphigenia so that the wind will blow again. Just as Agamemnon is about the sacrifice his daughter, Artemis sends a deer and the deer is sacrificed instead of the girl. Then, Iphigenia serves as a nun at the Artemis Temple and the winds begins to blow again."

Demirel also said that archaeologists anticipate coming across new surprises in the future, similar to the 1,800-year-old mosaic.