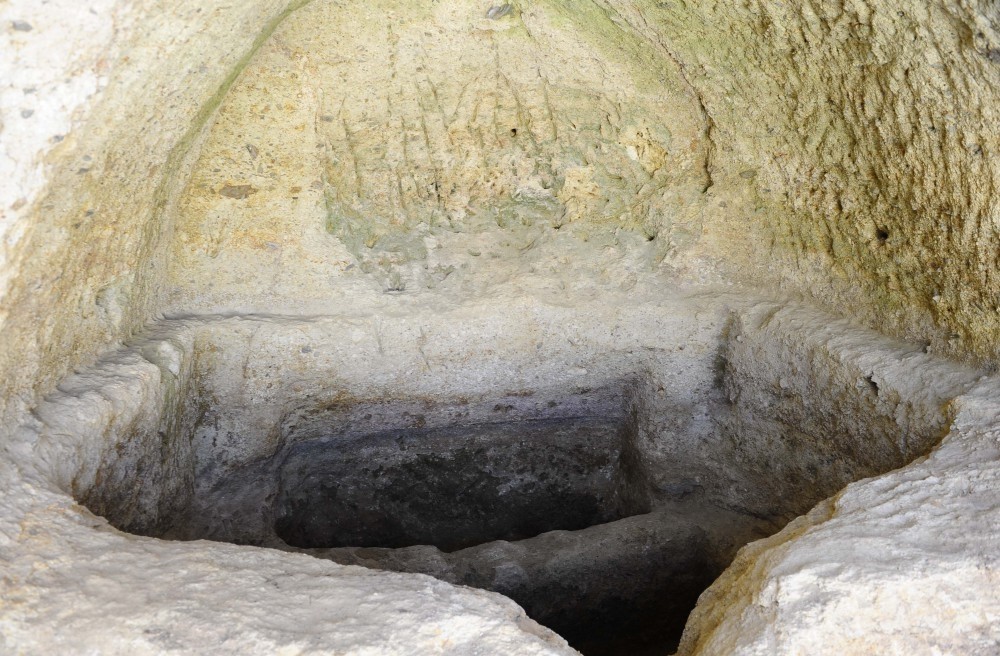 Three types of tomb monuments have been discovered so far u2013rock-cut arcosolia, simple pit graves; shallow graves for lower classes and tombs that resemble a boat-like shape.
by Anadolu Agency Jul 25, 2017 12:00 am

2000-year-old tombs were discovered during a road excavation in the Uşak province. The 33 tombs are thought to be built for those who died during battles as there are no remains in them

A 2,000-year-old necropolis from the Roman period has been unearthed in Uşak province during routine roadwork in the area.

The sprawling cemetery with 33 tomb monuments was discovered during excavations, revealing the period, locals erected symbolic tombs for fallen soldiers during war.

Deputy director of Uşak Museum, Şerif Söyler, told Anadolu Agency (AA) that local officials began excavations after the area was registered as a historic site by the General Directorate of Cultural Heritage and Museums, explaining that 52 excavation drillings were conducted and 33 tombs were unearthed in the area.

Noting that archaeologists often discover ancient relics left behind as gifts for the deceased in tombs, Söyler went on to say: "What is striking is that these tombs contain no human remains. For this reason, we believe that these are symbolic tombs. Locals likely created these tombs for those whose remains could not be brought home during war. Historically, funeral ceremonies were held according to the religious beliefs of the era, leading us to conclude that the tombs were likely erected for the purpose of such ceremonies," he asserted.

Indicating that some of the shallow graves have been destroyed by smugglers, Söyler said that the losses are both historically and culturally significant and cannot be compensated in any way.

Söyler told AA that officials plan to prepare a report upon completion of the excavations: "After protective measures are taken, the future of the site will be decided. It is important that we complete these excavations."

He pointed to the importance of Uşak in archaeological terms, saying that ruins dating back nearly 200,000 years belonging to Neanderthals of the Paleolithic Age have been found in the Sürmecik district of Banaz. "We want to bring the archaeological wealth of the city to light. The symbolic necropolis of Kayağıl is a remarkable discovery. Excavations are going to begin soon in Blandus, a site from the Roman era."