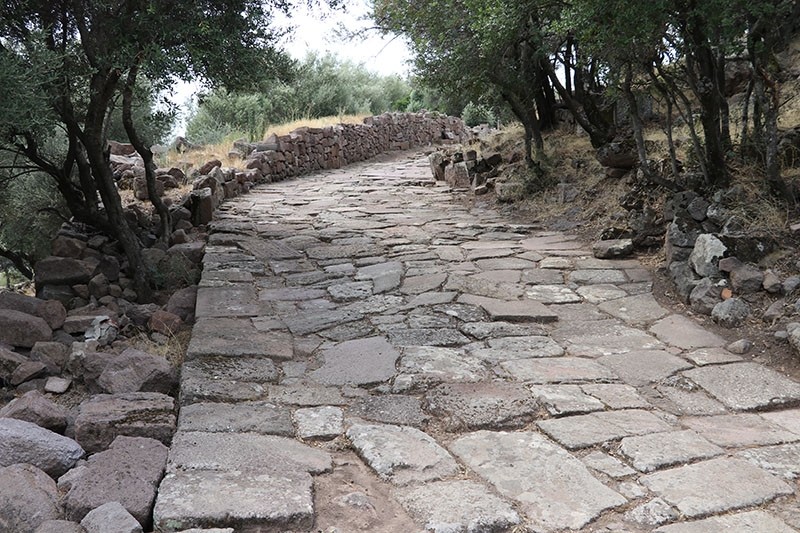 A 55-kilometer section of a road that was built 2,000 years ago has been discovered in ongoing excavations of the ancient city of Aigai located in Turkey's Manisa province.

Assistant Professor Yusuf Sezgin, faculty member at the Celal Bayar University Archaeology Department and head of the excavation team, explained that Aigai was one of the 12 ancient cities established in Western Anatolia.

Sezgin said that excavation work, which began in 2004, has pointed to evidence that the city became a regional point of economic and cultural attraction during the Hellenistic period in the 3rd century B.C. with the support of the Kingdom of Pergamon.

The ancient city of Pergamon, now the town of Bergama, is located some 30 kilometers north of Aigai, nestled in the Yunt Mountains of the Aegean region.

Sezgin said that the team had come across a road dating back to Roman era in 1st century A.D., which started from the Aegean Sea shore and was once used to facilitate transport between Izmir and Manisa.

"It is noteworthy that the road is as solid as the first day that is was built. Our examination showed that large water discharge channels were constructed under the road to prevent possible flash floods. In addition, we noticed that engravings were carved upon the stone plating to prevent horses from slipping during winter," Sezgin said.

The road was first used as a route for war campaigns, and later for trade caravans, Sezgin explained, noting that it was part of a larger system of paths operated by the Roman Empire, which was famous for building vast networks of roads.

Sezgin added that he hoped the road would be open for visitors in the upcoming years.