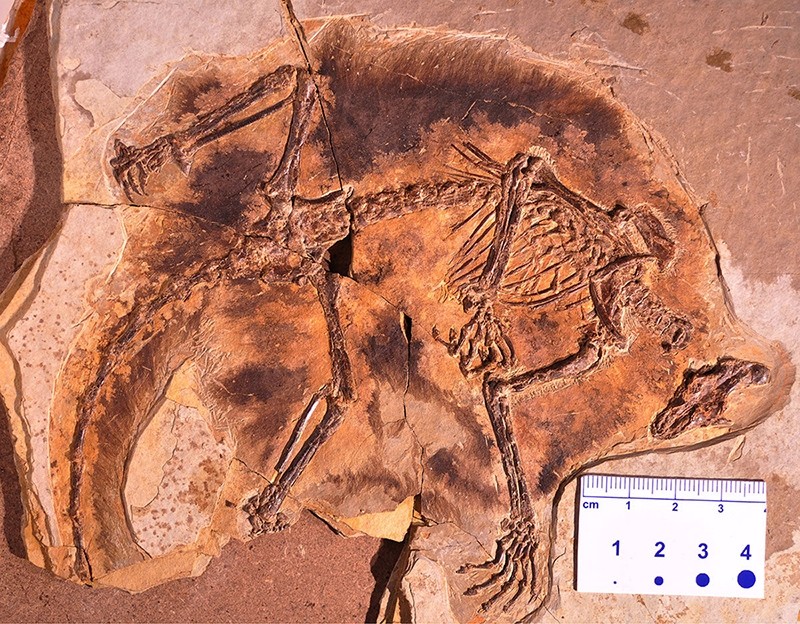 A fossil of a gliding mammaliaform Maiopatagium furculiferum, type specimen is shown in this undated handout photo from the Beijing Museum of Natural History (Reuters Photo)
by Aug 09, 2017 12:00 am

In dense Chinese forests populated by dinosaurs 160 million years ago, two furry critters resembling flying squirrels glided from tree to tree, showing that even in such a perilous neighborhood early mammals had succeeded in going airborne.

Scientists on Wednesday announced the discovery of fossils of two Jurassic Period gliding mammals so well-preserved and complete that they show the wing-like skin membranes the creatures employed while gliding effortlessly between trees.

The two species, Maiopatagium furculiferum from Liaoning Province and Vilevolodon diplomylos unearthed about 40 miles (65 km) away in Hebei Province, come from an extinct early mammalian side branch.

These two and another apparent glider from about the same time that was described in 2006 were the vanguard of the mammalian air force. It was not until more than 100 million years later that bats, which use powered flight like birds, and more gliding mammals appeared, following the dinosaurs' demise.

Mammals first appeared roughly 210 million years ago. These fossils underscore that early mammals were not merely cowering at the feet of dinosaurs but boasted a range of body plans and lifestyles. They included beaver-tailed swimmers, tree climbers, hoppers, burrowers and small carnivores that ate baby dinosaurs.

"Despite living in dinosaur-dominated ecosystems, early mammals diversified into many ecological niches," said University of Chicago paleontologist Zhe-Xi Luo, who led the research published in the journal Nature. 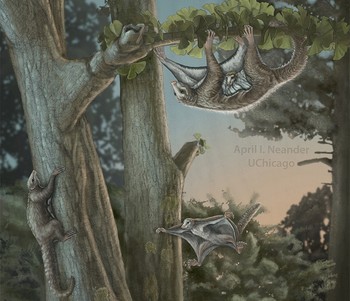 Maiopatagium was about 9 inches (23 cm) long, similar in size to flying squirrels. Vilevolodon was a bit smaller. Maiopatagium's teeth resemble those of fruit bats, suggesting it ate soft plant parts. Vilevolodon's teeth were more like those of squirrels, good for seed-eating.

Judging from hand and foot bones, the scientists concluded the two roosted, using all four limbs to hang from trees like modern colugos, and gripping tree branches with their feet like bats.

"The gliding membranes were attached to the four limbs, likely at or near the wrists and ankles," University of Chicago paleontologist David Grossnickle said.

They lived at a time when small feathered dinosaurs like Anchiornis also were experimenting with flying, on the evolutionary road leading to birds. They lived alongside pterosaurs, reptiles that tens of millions of years earlier became the first flying vertebrates. (Reporting by Will Dunham; Editing by Sandra Maler)