Human bones were engraved as part of cannibalistic rituals in the Stone Age, scientists say

An Upper Palaeolithic engraved human bone associated with ritualistic cannibalism can be seen in this undated photo recieved from the Natural History Museum in London, August 9, 2017. (REUTERS Photo)
by Aug 09, 2017 12:00 am

Engravings on a human bone from a prehistoric archaeological site in a cave in southern England shows that human cannibals ate their prey and then performed ritualistic burials with the remains, scientists said on Wednesday.

The forearm bone appears to have been disarticulated, filleted, chewed, and then engraved with a zig-zag design before being broken to extract bone marrow, said scientists from Britain's Natural History Museum who conducted the analysis.

The finding, published in the journal PLOS ONE, adds to previous studies of bones from the site, called Gough's Cave, thought to be from Britain's Palaeolithic period - the early Stone Age.

Those studies confirmed human cannibalistic behavior and showed some remains had been kept and modified, making human skulls into bowls, or "skull cups".

The zig-zag cuts are undoubtedly engraving marks, the scientists said, and had no utilitarian purpose but were purely artistic or symbolic. 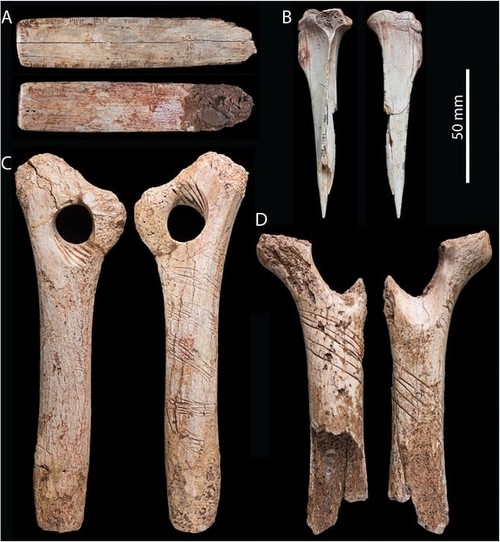 Silvia Bello, a Natural History Museum who worked on the study with colleagues from University College London, said the engraved motif was similar to engravings found in other European archaeological sites.

"However, what is exceptional in this case is the choice of raw material - human bone - and the cannibalistic context in which it was produced," she said.

"The engraving was a purposeful component of the cannibalistic practice, rich in symbolic connotations."

Discovered in the 1880's, Gough's Cave in Somerset, southern England, was excavated over several decades ending in 1992.