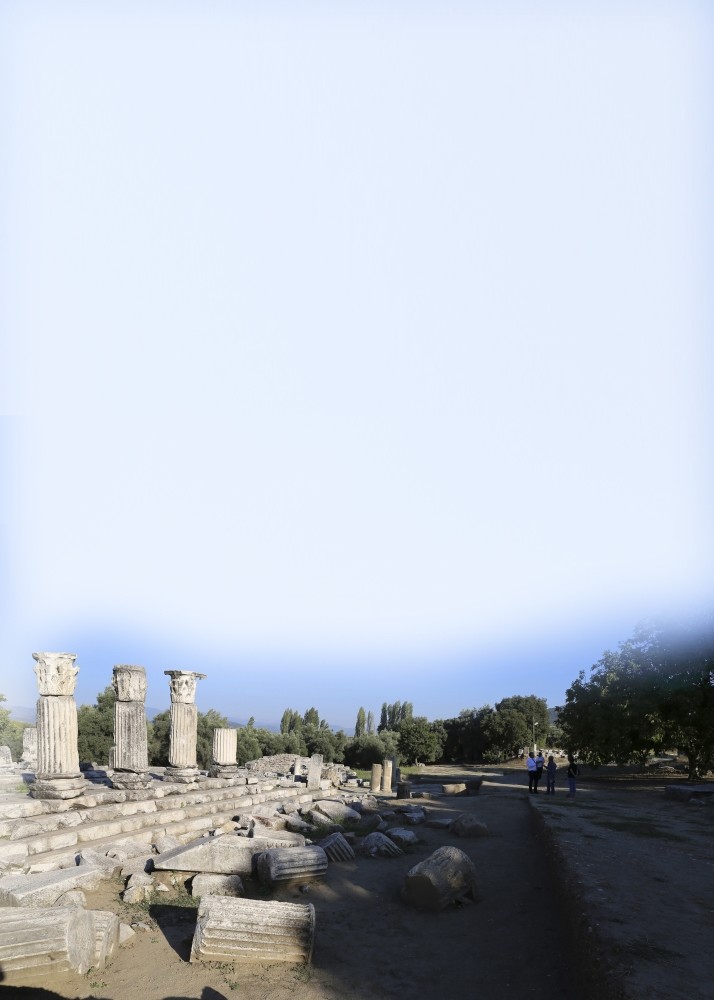 After a six-year hiatus, excavation at the 3,000-year-old Lagina Sanctuary, which houses the biggest temple ever built for Pagan goddess Hecate, will continue.
by Anadolu Agency Sep 14, 2017 12:00 am

Excavation works at the Lagina Sanctuary, which is accepted as a center of Paganism, will begin again after a six-year hiatus

The heritage of Osman Hamdi Beg, a Turk who was the first person began excavation works in Lagina, is continuing with the efforts of professor Bilal Söğüt.

After a six-year hiatus, excavation at the 3,000-year-old Lagina Sanctuary located in Muğla province's Yatağan district will continue.

The works started with drawings of the area and continued with the unearthing of the biggest temple ever made for the Goddess Hecate, who is considered sacred according to Pagan beliefs.

Speaking to Anadolu Agency, Yatağan District Governor Hayrettin Çiçek said that when Muğla is mentioned, the sea, the sand and the sun come to mind.

Çiçek added that Yatağan, situated in the interior part of the city, came to promi

nence for its cultural and historical richness. He also pointed to the importance of cultural tourism in the region.

"Ancient cities and historical places are attracting more people day by day. The Yatağan district is in an important point in this context. Yatağan hosts two important ancient cities, Stratonikeia and Lagina," he said.

The area that is frequented by many local and foreign tourists along with 100,000 Pagans every year will be visited by more people after the completion of the excavation works.

Çiçek noted that the first excavation works that were started by Osman Hamdi Beg allowed the site to rise to prominence, adding that 100,000 Pagans have come to see the area from northern Europe in the last year.

"We think more tourists and Pagans will visit this site as a result of the excavation works being conducted here. We will also support promotional works," he said.

"Plans are also underway for the establishment of a cafe, restrooms and other areas according to demand," he said.

"I believe that Muğla's Yatağan will become an important tourism destination in our country along with Lagina and Stratonikeia," Çiçek added.

Bilal Söğüt, the head of the Lagina Sanctuary excavation area, noted that Lagina is the religious center of the ancient city of Stratonikeia, which is 11 kilometers away, adding that he is heading the excavation works himself.

He said that the excavation works include efforts to revert the Lagina Sanctuary back to its previous state of magnificence.

Söğüt mentioned that Lagina was as much of an important center in the ancient times as it is for the region presently.

He said that the biggest temple constructed for the Goddess Hecate was found in here, Söğüt reported,

"Resembling no other construction of its kind from the ancient times, a bench composed of 11 steps in the western part of the sanctuary can be seen here," he said.

"It is very authentic as it is well-preserved. We can see the doors and the altar which stands nearly at the level of the podium, as well as other places at the temple that are directly visible," he continued. "We know that there are other three little temples apart from the temple of Goddess Hecate."

"Therefore, this site is important in its religious, cultural, political and historical aspects," he concluded.