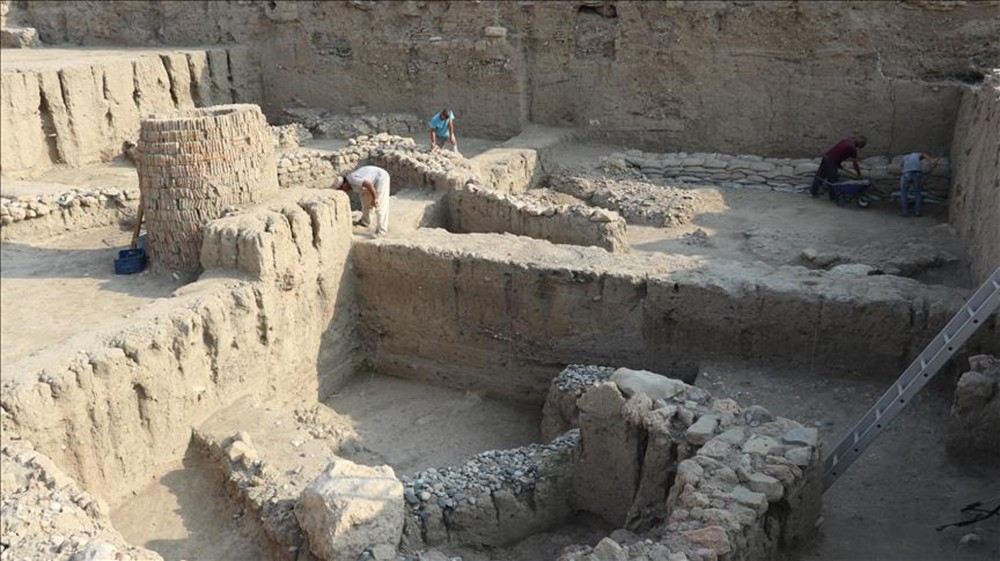 The Tepebağ Mound located in Turkey's southern Adana province and mentioned in ancient Hittite and Egyptian texts as being situated in the capital of Kuzzuwatna in the Cilicia region's capital of Adaniya under the Hittites, has undergone excavations since 2013 when the Museum of Adana began conducting archaeological digging.

With excavation continuing until now, the site will soon be turned into an archaeological park.

Upon discovery of the statue, "The Nurse Sitsnefru," which was smuggled abroad in 1882 and dates back to the 18th century B.C., according to its inscriptions, excavation work began at the Tepebağ Mound in 1936.

Since then, ancient artifacts belonging to the Hellenistic period, the Iron Age and the Early, Middle and Late Bronze Ages have been uncovered, along with ancient Ottoman constructions at the mound.

Excavation works began with the support of the General Directorate of Cultural Heritage and Museums and the Adana Metropolitan Municipality under the consultancy of Dr. Deniz Yaşin Meier from Bern University in April of this year.

So far, few artifacts dating back to Ottoman period, the Middle Age, the Iron Age and the Hellenistic period have been found.

Ottoman-era tobacco pipes unearthedMaterials that were used during the reign of the Ottoman Empire, including porcelain, various tobacco pipes and Byzantine coins, have been uncovered by archaeologists.

In addition, the remnants of ceramic materials brought to Adana from Cyprus, Greece, the Levant and Mesopotamia have been also unearthed during the excavation works of the "Iron Age layer" of the area which is located near the Seyhan River and is known by archaeologists to have formerly been a port city.

Excavation works conducted at the site have shed new light on the lifestyle, cultural relations, culinary and drinking habits and livestock trade of the ancient era with the works of different disciplines.

Tepebağ Mound to open for tourismSpeaking to Anadolu Agency (AA), Bern University Professor Meier emphasized the importance of the Tepebağ Mound for uncovering the history of Adana.

Prof. Meier explained that Adana is an authentic city with its structure, comprised of multiple cultural layers, which dates back to the Prehistoric Age. He implied that the excavation works at the Tepebağ Mound have raised social and cultural awareness as well. The professor explained that archaeologists have discovered ancient materials and cultural artifacts dating back to 3,000 B.C. at the Tepebağ Mound. "We will protect some architectural elements after the excavation works are completed here. The typical architecture of the whole periods will be preserved. An archaeological park project will be launched by the governorship of Adana and the Museum of Adana. After the works are completed, it will be opened to tourism," he said.

Prof. Meier also said that the works are being conducted in a small area for now because of urbanization, although the mound is located in a large area.